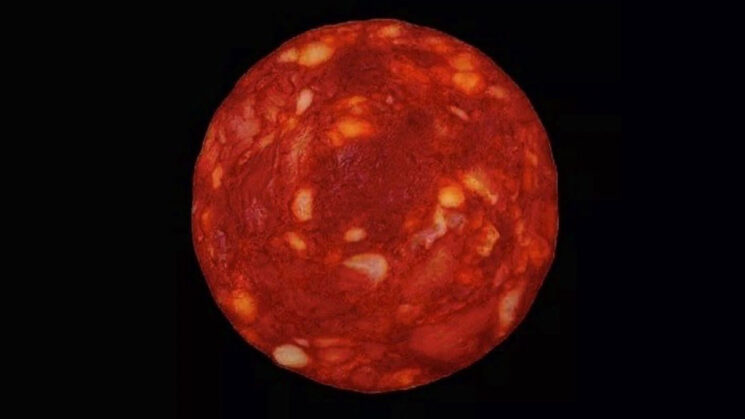 It’s always fun when scientists pull pranks and people believe it. It’s especially so when it’s a prank about a hot topic of the day. That topic in this case is the James Webb Space Telescope, launched on Christmas Day last year and has been sending a steady stream of pretty epic imagery back to Earth since July 12th – less than four weeks ago.

Well, on July 31st, famed French physicist Etienne Klein posted a photo to his 91,000+ followers on Twitter that… Well, for many of us, it looked a little suspicious but was claimed to be an image created by the James Web Telescope remarking on its “level of detail”. Well, it turns out it wasn’t. It was a slice of chorizo.

Photo of Proxima Centauri, the closest star to the Sun, located 4.2 light years from us.
She was taken by the JWST.
This level of detail… A new world is revealed day after day.

While it was retweeted by almost two and a half thousand people and received nearly 16,000 likes, Klein received a lot of backlash from some of his audience who knew right away that it wasn’t a legitimate image from JWT. Out of context, without knowing who posted it, what is actually shown in the photo is quite obvious. But given that it was posted by renowned French physicist Etienne Klein, it’s easy to see why so many were duped.

A short while after posting the image, Klein did post stating that the image was essentially a hoax. His purpose, it seems, was to remind people not to believe everything they read on the Internet, no matter who the source is.

Well, when it’s time for the aperitif, cognitive biases seem to have a field day… Beware, then, of them. According to contemporary cosmology, no object belonging to Spanish charcuterie exists anywhere but on Earth.

In view of some comments, I feel compelled to clarify that this tweet showing an alleged snapshot of Proxima Centauri was a form of amusement. Let us learn to be wary of arguments from authority as much as of the spontaneous eloquence of certain images….

He’s right about cognitive bias and that people will often believe what they’re told without question depending on who it’s coming from. I saw this image shared on Facebook by a random person and could immediately see that this wasn’t some distant galaxy. Those who’ve not heard of Etienne Klein before might have also immediately spotted what it was. Those who have… Well, a lot of them just took him at his word.