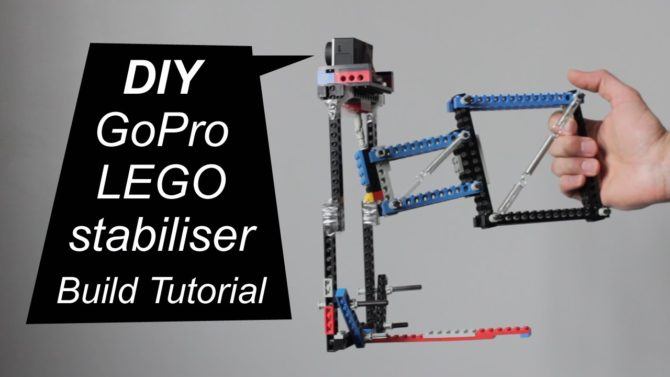 Stabilising small cameras such as GoPros can be tricky. Their light weigh makes them particularly vulnerable to things like wind or fast movements. There are commercial handheld options out there to give you smoother footage, like the Lanparte HHG-01 or the Ikan Fly-X3-Plus, but they can be a little pricey.

While it’s not going to give quite the steadiness you’ll get with either of the options mentioned above, this solution from Product Tank is a very cheap and extremely accessible alternative.

This isn’t the first version of a LEGO based camera stabiliser Product Tank have made, and this one was created in response to questions asked about the one shown in this video.

It’s a bit difficult to put a parts list together for this, as it’s mostly been put together out of spare bits he just had laying in a box and a bit of sticky tape. If you weren’t looking to reuse the pieces again for anything else, I’d probably consider using glue or epoxy to hold some of those components together.

The bands vs springs argument is mostly a personal preference, I’d say. The fact that you only have a small action camera on it probably outweighs rubber band load-bearing inadequacies and makes the choice a little easier. Springs are a generally more reliable option, especially with higher weights, but bands tend to produce a smoother “bounce”.

So, if you want a bit more stability with your action camera footage, this could work out pretty well. As most of us have Lego laying around somewhere still, whether it’s from our own childhood or having kids of our own (or you’re just a big kid who likes Lego) it’s pretty easy to get hold of the parts.

I probably wouldn’t take it diving or snowboarding, though.

Have you had a go at building this yet? Will you? What modifications have you tried or might consider trying to make it even better? Let us know in the comments.

Make yourself this DIY camera stabiliser rig for under $5