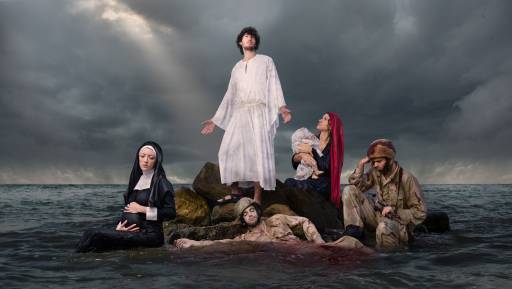 When you direct or plan a photograph it seems that you control each and every aspect of that photo.

In street photography you try and capture a decisive moment, which is completely out of your control. In a stage shoot, however,  you can try and create a reality from scratch. The more you put into planning and preparations, the more you can get closer to that perfect image you conceived  in your head.

I have given this a lot of thought when I started working on our last photograph in the song series. The ambitious idea was to shoot a staged photograph with multiple models tens of meters into the sea while everyone is standing on rocks. It quickly became obvious that there are many technical challenges to such photoshoot and I will talk about a few of them in this post. 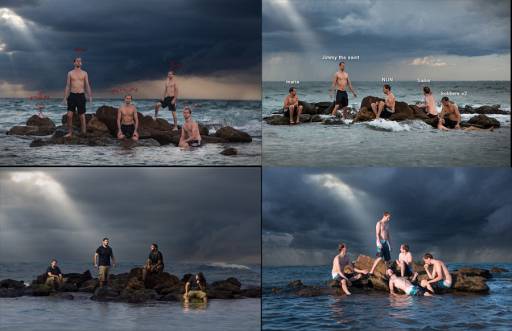 If there is one thing we’ve taken away from while working on this series is that it take many pilots and tests to get the final photograph as close as possible to the photograph you have in your mind. Try and think back to that first day at a new job where everything is strange and unfamiliar. Now think of the same place, a week later. This is the familiarity I am talking about.

And this photograph was so technically complex that we took so many tests and pilots that we lost count.

Shooting at sea took a lot of our control over many parameters (with or without pilots). A day before the shoot, we were still not 100% at ease as the forecast was talking about meter high waves (read – there goes our plans). Luckily the waves were ideal – covering most of the rocks, while still allowing to sit on top of the them comfortably. The fact that most rocks were under the waves, eventually gave a stronger feeling of desolated location and models. 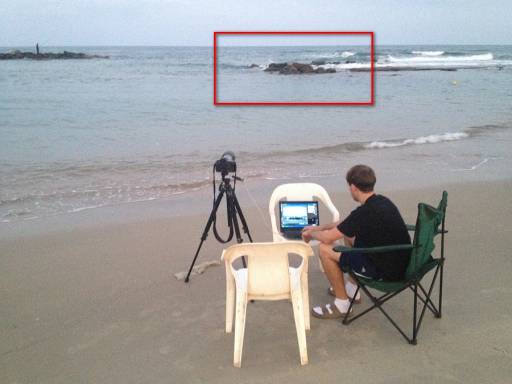 Most pilots and tests were done while we were “comfortably” sitting on the beach with the models or stand-ins being about 60 meters into the sea. Mainly because we afraid of getting our gear wet. We thought that shooting from the beach with a 200mm lens will solve the getting the gear wet issue. We were also planning to shoot on a tripod which would be kinda hard at water with sea-sand underneath.

Yup, this seems just about right. However, with all the preparation and commotion we forgot about one fundamental thing – Perspective. Actually, perspective is one of the aspects of the photo that you, as a photographer has complete control over. I am not going to go into the theory of perspective, but a brief summary would be: a picture taken from afar will look like a picture taken from afar. Or as Robert Capa coined: “If your pictures aren’t good enough, you’re not close enough“. (and if they are still not good enough, get even closer)

So instead of shooting with the 200mm lens we used for the pilots,  we shot at 31mm (about 46mm in uncropped sensor values). If you’re wondering how we used the tripod, luckily we found a nearby rock which were a perfect fit for my Slik tripod.

There is no better way to show how the photo was shot than a behind the scenes video. It has all the prep work, 9 (NINE) pilots, and a good look on what went on the day of the shoot.

Pay close attention on 2:45, where two of my strobe try to free dive in the salty water (and sadly succeed). Now, take 5, dial that volume up, go full screen and hot play.

Both me and Maxim Golvanov who, as always, was integral to the production feel this is the best photograph of the series yet. We’d love to hear what you think and take any questions in the comments.

And just before we farewell, here is the full list of credits:

This post is by Tomer Jacobson, a freelance on location photographer based in Israel. Tomer runs a lighting intensive Hebrew blog, luckily you can read it using google translate (if you don’t mind the mechanical English sound :)

P.S. This photo is a part of an ongoing series inspired by music, you can watch the entire series here.

P.P.S. Another BTS of this series for the song Black by Pearl Jam cna be found here.

Dramatic photos reveal what Paris looks like submerged in flood

This is why we can’t have nice things. Canyon featured in Justin Bieber video closes due to visitor flood
« This Gravity Defying Set Will Give You Spiderman Like Powers
HDSRL Recording Primer – Which Microphone To Use? »