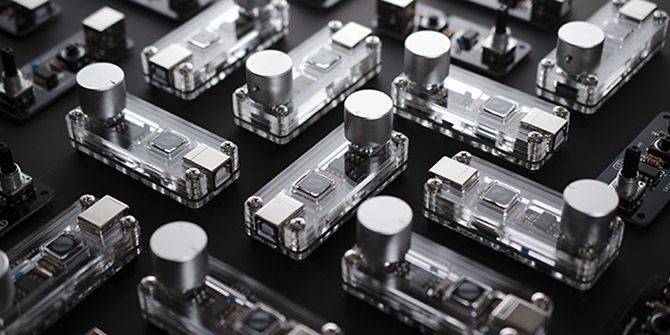 External dials and gizmos have been common in the movie industry for years.  Their sole purpose in live is to help speed up workflow and productivity, assisting with things like editing and colour grading.  Now, they’re starting to become more popular for the regular desktop and stills editing with Photoshop.

BrushKnob, developed by Japanese concept artist, Wataru Kami, is a very inexpensive attempt to bring this kind of capability to the masses, releasing the entire project as OpenSource; circuit, code & all.

Plugging the device into your computer recognises a standard USB HID (Human Interface Device), requiring no extra drivers, containing just two buttons.  These then are mapped in Photoshop the way you’d set a regular keyboard shortcut.  No muss, no fuss.

Because it’s seen as a standard USB keyboard, this means that you’re not just limited to Photoshop.  Many other applications can have keyboard shortcuts remapped to utilise the device.  Here it’s shown in Blender 3D to allow a quick rotation around an object within a scene.

I think for this particular example, it’s probably still less hassle to just click your wheel and move your mouse to rotate around your scene, but it still holds a lot of potential for Blender 3D, especially for fine control of shader nodes, for example.

Sure, there are other options available, like Palette, but many of those options are beyond the budgets of a lot of users (or at least, beyond what they’re willing to spend).  If you need ultra cheap, then you could always go the DIY option with a USB Gamepad, but that can be a little unwieldy when already trying to balance between a wacom tablet and keyboard shortcuts.

The BrushKnob seems to be a nice balance between the two.

The entire project being OpenSource also means that you can also have a go at building your own, and customise it however you like.

Based around the Atmel ATtiny85 microprocessor, adding more functionality and modifying the code for extra buttons and dials should be pretty straightforward for anybody with AVR programming experience.

Do you want a second dial to adjust the feather of the brush or eraser?  Want three dials for controlling lift, gamma and gain separately in video editing software?  Or a bunch of controls to completely replace your regular keyboard shortcuts in your software of choice?  Well, now you can.

While the information is freely available via GitHub for you to make your own, Kami has started an Indiegogo campaign to fund a small production run of these units for less electronically-inclined.

With 18 days left, the campaign has raised 69% of its target.  BrushKnobs are only $28 each and are expected to ship out in October.

What do you think?  Have you already jumped on the new wave of USB controllers? Or are you sticking with the more traditional keyboard & mouse/Wacom combo?  Let us know in the comments.