Living next to Europe means I get to visit the UK Photography show* every march. This is the biggest photoshow in the UK and you can think about it as a Photokina prequel.

Bowens were supposed to have a MASSIVE booth on that show. (A huge booth, a show stage for them and a lounge – a few thousands of square feet). A verified source just informed DIYP that Bowens is pulling out out of the show. More details, and some analysis ahead.

First here is what we got from our verified source:

[Bowens] decided to pull out of The Photo Show ENTIRELY!
Not a reduced stand
Not a smaller stage
Not limited stock
They are not even going to be putting the banner up, no presence whatsoever. It’s difficult to imagine that one of the largest stands up there pulling out at this late stage. That is one gaping black hole TPS now has to fill and Bowens have pissed off a lot of people in doing so.
Obviously those pissed off people include the bowens team togs, models, MUA’s who have been expecting that gig and money and turned down other work because if it.

And indeed, Bowens is no longer listed on the TPS site.

BTW, that was their listing last week:

But Why Is This Big?

Now, to get how big of a thing this is for both The Photography Show and Bowens here is how Bowens were planning to play at the show.

As a leading lighting company, Bowens ordered quite a bit of space. They had one of the bigger booths in a prominent location, they had a big corner stage and an impressive lounge 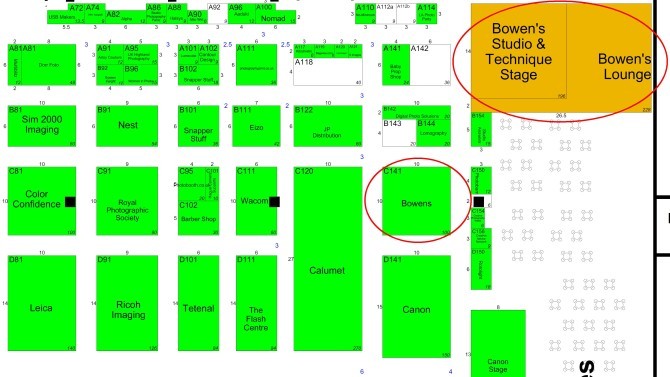 I left Canon’s Leica and Ricoh in the screen shot, so you can get an idea of size…

See that top, left orange square, it was a stage that Bowens were planning to fill with demos, educational material and live shows.

everyone who’s ever been on a trade show knows that sitting space is rare and coveted. And Bowens had a huge lounge (which is still on the TPS website). This is where you can go to sit for a bit, meet interesting people or have a quite conversation. The fact that Bowens had a lounge up meant they are committed to the industry.

First let me say that pulling away from a show in the last minutes (and 4 weeks in the trade-show biz for such a huge stand is last minute) is almost unprecedented. It’s not that it never happens, but it rare. the amount of resources that go into planning, booking the space and producing materials is huge. It takes several months to pull off a huge stand like this and I estimate that the space was already mostly paid for as well as many other materials that were planned to be used in the show.

Secondly, there are many more expenses tied into actually BEING in the show: Shipping things over, allocating inventory, paying to models, photographers, roadies, MUA artists, traveling, print material and the list goes on. So not being in the show actually does save some moeny (though I’ll be surprised if any of the pre-payments for space and planning will ever be returned).

Thirdly, this leaves the show with a big gap. an empty booth and a dead corner that the show now needs to fill last minute. Having that huge of a spot empty would just look bad and reflect poorly on the show. I was not at the room where Bowens told the show exec that they were pulling out, but I would imagine that the only pull out that the producers were thinking about is pulling Bowens marketing dept. hairs from their heads.

Bowens gave no official or unofficial excuse for the reasons to pull away from The Photograhy Show. But I can try and speculate.

One option would be that Bowens is bleeding. They are unable to compete with the new Prophotos, Elinchroms and Broncolors out there and the business is, well, not doing so great. So Bowens is taking a deep breath and regrouping its powers so it can focus on getting back in the game. Anything that does not directly makes money or contributes towards a new product is cut away.

A second (albeit sadder) option is that Bowens are cutting expenses so they have some value to offer to investors or potential buyers. This is what happens when a company tries to continue doing business until a life-line is offered, and pouring money on a show will take away from the time Bowens has to live.

Either way, this is not happy news.

*I’ll be there this year. Just look that weird hair guy with the DIYPhotography shirt, and come and say hi.

UPDATE: Bowens reached out and it seems like our concerns were premature. Bowens says they are solid and will be kicking off a constant light solution at BVE  and some strobes later this year. YAY!

UPDATE: Bowens sent in a press release. they will come back big, just not at TPS:

The company made its decision when it became clear it faced ‘time challenges’ on brand new products planned for global launch at the show.

Alan Walmsley, Bowens sales and marketing director explained: “The decision to book 2016 show space was taken many months ago – after fulfilling our commitment at TPS 2015 to create the biggest ever presence by Bowens at any show or convention in almost seventy years.

But this 2016 show judgement has been predicated on our full expectation to use the NEC event as the platform for introducing our new flash system products.
Despite our all-out attempts to fulfil this ambition on schedule it is clear that the first models of our new ‘Generation X’ programme will not meet the required delivery deadline.  This is a major disappointment for all parties and we apologise unreservedly to everyone who was looking forward to seeing us and our new products in Birmingham.”

He added: “We are now planning our own dealer/distributor and press event in London in the summer -when we are 100% satisfied we will have fully working units available – not just renderings, plans and prototypes.”

John Gobbi, Bowens MD said: “We have noted recent social media noise, rumour and speculation but we must do what is right for the company. We want to launch our new-look products in fully working order and have them immediately available for our customers to buy – and sadly that is not now going to happen by the end of March.”

He added: “Bowens has undergone much change in recent months. We are effectively in the process of relaunching the company, embracing a renewed and reinvigorated focus on R&D and a brand new and highly compelling website.”

“These initiatives are part and parcel of our plans to completely reimagine this amazing and much loved brand and I can guarantee that our game-changing ‘Generation X’ programme will be very much worth the wait.”

John Gass, technical director said: “Generation X is the result of a major acceleration of our R&D programme, combined with a deep analysis of what our customers have been telling us they need to compete in today’s commercial environment. These new products are going to be unbeatable in their class in terms of functionality, aesthetics and of course, cost.”

Having Trouble Finding Bulbs? This Is Why

« Adobe Leaks Themselves with Lightroom Mobile 2.0 for Android. Still not available
This Is Why Canon Pro Lenses Are White »