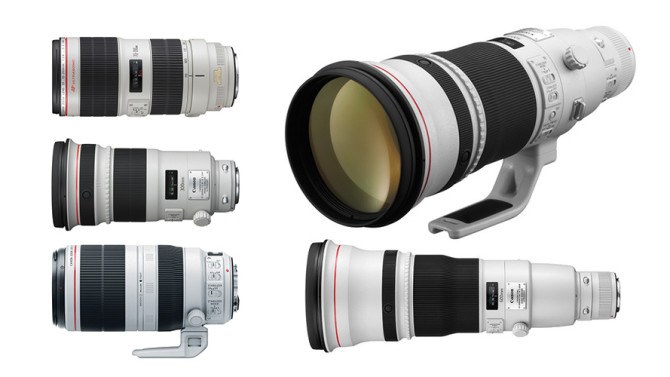 At virtually every major sporting event across the planet, we see groups of photographers huddled together on the sidelines, their allegiance often only visible by the colour of the lenses attached to their cameras, but why are Canon’s telephoto lenses white?

Canon’s official position is that large lenses contain large elements and that are more susceptible to heat expansion than the lens elements found in smaller lenses.

It seems to make some sense.  A white surface (ok, so it’s really a very light grey) reflects sunlight, which in turn helps to keep the lens and its glass elements cooler and prevent them from distorting.

One theory that reinforces Canon’s statement, is that this trend started when Canon lenses started using fluorite elements, which is more sensitive to heat than modern optical glass. Here is the official quote from Canon Europe:

Lenses contain glass elements. These expand with heat. This is not usually a problem with compact lenses − the amount of expansion is small. But large lenses contain large elements and here expansion can bring a lens close to the limits of its design tolerances. A white surface reflects sunlight, helping to keep the lens cooler

A post dating back to 2004 suggests that those same Fluorite elements are why NASA chose to go with Nikon instead of Canon when it came to taking lenses into space.

The guy told me they use Kodak and Nikon DSLRs and Nikkor lenses exclusively. When asked why they weren’t using Canon DSLRs, he replied that […] Canon use Fluorite lens elements in many of their long lenses and that in trials the fluorite elements had suffered fractures from the vibration associated with a launch.

On one occasion, a fluorite element had completely disintegrated rendering the lens useless. ED elements did not suffer any fracturing problems.

The general idea continues that, since then, white lenses have simply become Canon’s brand identity, so the colour has remained, even in lenses where there are no longer any Fluorite elements.

The fact that lenses such as the 300mm f/4L IS USM, and the ever popular 70-200mm f/2.8L USM, which don’t contain any fluorite elements, are still “white lenses” seems to back up this idea, although the whole heat expansion thing still seems to be a big concern to many.

Perhaps this is why Nikon have also produced white versions of some of their lenses in the past, to appease those people making the brand switch, or that perhaps just want to blend in with a different crowd on the sidelines.

Whatever the real reasons, if you don’t like the colour of your lens, or just fancy a change you can always make your own lens covers!

« Bowens Pulls Out Of The Biggest Show In The UK. Could Indicate Trouble For The Lighting Company
Stop Motion photography brings Honda advert (and photographic inspiration) to life »