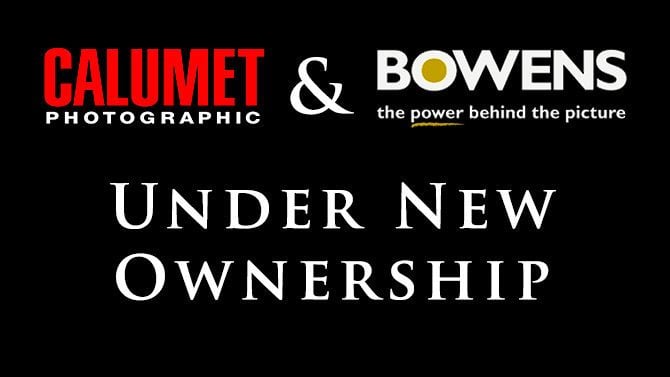 After Calumet’s closure of US based retail stores and filing Chapter 7 bankruptcy in 2014, it was pretty clear they were in trouble.  With Bowens, this news comes as something of a surprise, however pulling out of The Photography Show at the last minute was a big clue that something was up.

Now, both companies are reported to have been acquired by investment company AURELIUS.

Calumet closed its doors in the USA after 75 years of business, with many employees only finding out they no longer had a job the night before the company filed for Chapter 7 bankruptcy.  European based stores, however, have remained open with 17 locations across the UK, Germany, Belgium and the Netherlands.

Bowens, originally founded in 1923, also seems to have been struggling lately, although a little more privately.  After a very short notice withdrawal from The Photography Show, rumours started to flow.  Those rumours were tackled head-on by Bowens, stating that the only reason they pulled out is because their new product line wasn’t yet perfect, and they didn’t want to make a half-attempt on a stand.

Despite the now obvious issues these companies were facing, Calumet and Bowens recorded combined revenues of 110 million Euro, which shows that there is still a substantial market out there for these brands.

We are confident that, by providing the current management team with the financial and hands-on operational support to implement their development plan, we can capitalise on the opportunity created by the ongoing growth in the high-end segment of the photographic market.”

– Tristan Nagler, Managing Director of AURELIUS in the UK

It sounds like the standard sort of PR statement you’d expect for such an acquisition, and one can only hope that it’s true.

AURELIUS’ investment would allow Calumet to upgrade its current locations, further its rental offerings and open up new stores in more areas.

Given the relatively little competition, in the UK at least, since the major downsizing of Jessops and elimination of Jacobs, there’s certainly room for more stores in the high street, especially if they plan to also step up their game for higher end users.

The Calumet team is excited to continue the development of the business and the roll-out of outstanding photography retailing to more cities and countries with AURELIUS’ support.

Little information, well, none at all really, has yet been announced regarding the the Bowens brand, but one hopes their future is bright (no pun intended).

I’ve been a big fan of Bowens gear for a long time, and you’ll get my Ringflash off me when you pry it from my cold dead hands, so it would sure be a shame to see the brand disappear or be absorbed into something else.

AURELIUS is one of Europe’s leading investment groups, based in Munich, London, Stockholm and Madrid, and you can read the complete press release on the AURELIUS website.

Exciting news for Calumet and Bowens?  Or a last desperate attempt to save a couple of possibly dying giants?  Let us know your thoughts in the comments.

Without Prior Notice, Calumet Just Closed Down Every One of its Stores in the US, and Filed for Bankruptcy