Here are some great news for anyone who’s been wanting to shoot raw video. While up till now a Magic Lantern loaded Canon DX0 was the only sub $1000 option, Black magic today released their Blackmagic Camera 1.5 which adds RAW capabilities to the Black Magic Pocket Cinema Camera. 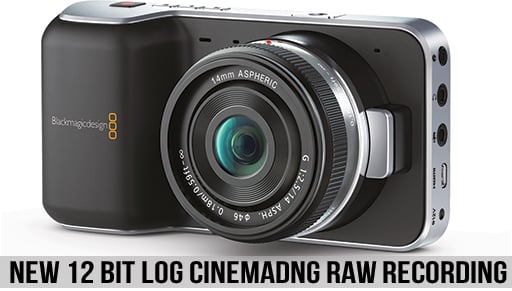 Raw Footage will be captured in 12 bit log CinemaDNG RAW format which is movies what RAW is to pictures.

Here is the announcement from Blackmagic:

The Blackmagic Pocket Cinema Camera uses the open standard lossless compressed version of CinemaDNG RAW. CinemaDNG RAW lossless compression works in a similar way as a ZIP file where the RAW files are compressed during recording without the loss of any part of the image, so all images retain the same quality when they are decompressed. That means customers get back the mathematically perfect high quality RAW file image that they recorded.

While the format is compressed it still delivers huge amount of data so BMCC engineers recommend a fast (and big card) – the Sandisk Extreme Pro 64GB SD card.

While the update should be pretty straight forward for Windows users, Mac users will need to get an update from Apple (which is not released yet) for the full functionality:

The lossless CinemaDNG RAW will work in DaVinci Resolve and applications from Adobe like Photoshop and Lightroom. However, the Preview and Quick Look feature in OS X is not compatible and you will not see a proper image. This has been reported to Apple. Hopefully, they will have an update that will address this

The new software can be downloaded for windows here (or here for mac), though the BMCC site seems to be under somewhat of a stress.

I am hoping to see a new stream of reviews and comparison footage coming in over the next few days, especially vs. Magic Lantern RAW film formats.

« The Leica Freedom Train: A Legacy Beyond Photography
The Box – How To Build, Light & Shoot A Photography Set On A Budget »