Like most projects, this one started with a very small and vague idea. I thought it would be cool to build a set that would be kinda like its own ecosystem: something very moody/foresty/damp. 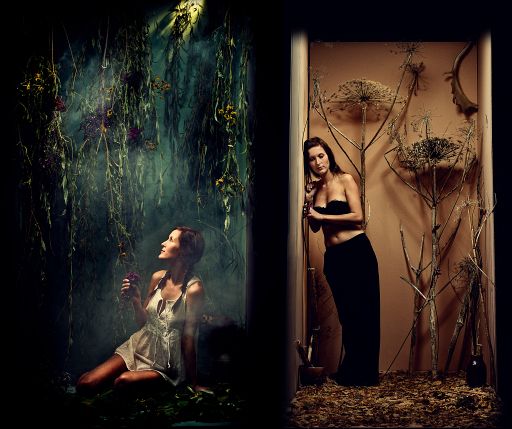 First idea was to make it rain in a random household room. While I was brainstorming and getting into the details, I found it would be too much of a hassle to redirect all the water out of the studio. So instead of a room, maybe something smaller would work? It would have to be big enough for someone to stand in it, but small enough so that you could see that there is actually a box inside a room. Then have it be very moody.

I took out some measuring tape and came up with the perfect measurements: 2,50mtr by 1,50mtr. Having this restriction and idea on my mind, I got a clearer vision of where this was going and what I wanted to achieve. For the space/box with rain I could make the character hold an umbrella for a dramatic feel.

Now that I have these elements, it would be great to have a second contrasting image to the first one. Or maybe 2 or 3 stages in which the space/box progresses.

From the person longing for rain in a dry, brown, dessert-like box, to the person in luscious, green, flowery, misty and wet box. Having the mood be:foresty/damp – dry/desert/desolate and this story idea of having different boxes, plus the setting in which it happens, the brain releases all the other finer details straight out.

I started by throwing a pencil drawing together of the 3 stages of the boxes. This is not completely what I wound up doing. But when the idea is clear, I need to get it on paper as soon as possible, for later reviewing and adjustments. I can’t sketch, I do weird stick thingy’s, but as long as you can read your own sketches, it’s all good :). 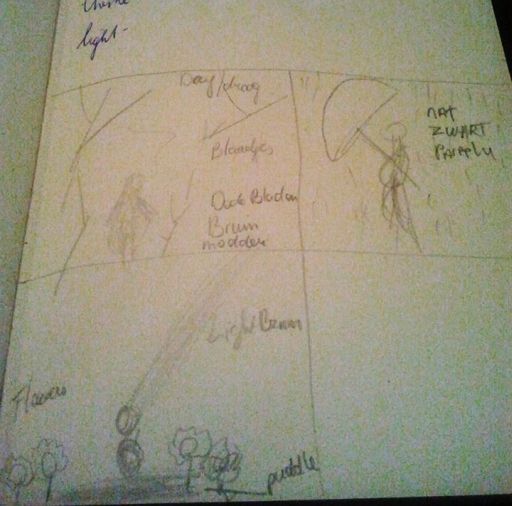 So what you see here is the initial idea I had and got out. First was a frame of someone in a dry, brown box. With some dried out sticks & branches. The second would have the person holding an umbrella while it’s pouring rain in a blacked out box. And the last one would have the person in a spring, happy, flowery, foresty box, with a light beam coming down.

While I was sketching this (2min), I starting getting in…

For the dry box, I knew the character would be very sad, longing for a drop of water. A bit of green. Maybe even make it a diptych so that the dry character can interact with herself inside the other box. Longing for those 3 walls that are so close, but yet a world away.

For the (for lack of a better name) ‘wet box’, I wanted the character to be very happy. Joyful. Its lush green vegetation, moist feeling, smells of rain forest. Maybe the character sitting on the ground all happy. Not knowing the other dry box is there, but still being alone in this world.

At this point I started getting doubts about the rain picture and initial rain idea, holding an umbrella. Would you be happy that it’s raining? But then you would have 2 boxes with the person portraying happiness. I couldn’t fit it in between the 2 stronger story boxes. But I didn’t scrap it yet, and kept trying to piece it in. While continuing on:

I thought it would be fun to paint the box the same color as the environment; green for the ‘wet box’ and brown for the ‘dry box’ (while still thinking: and the one with rain then? black maybe? moving on!). This right here can stop a flow of ideas. Because you hit a road block. But I don’t like excuses! So instead, I leave it be, and keep going with what I’m sure about!

It would be cool to hang green plants and flowers and leaves in the wet box. Old willow tree type plants and very dried out old plants in the dry box.

At the time of making this set, autumn just started. So the streets were covered in yellow/brown autumn leaves everywhere! So the images started getting clearer and clearer in my mind. The dry box would be brown, have brown leaves as a floor, dried out branches and the person feeling very sad and longing for rain/water/’the other box’.

Hopped on my bike and started going through parks, looking for different kinds of plants that would fit in either of the boxes. I came across a lot of different, cool hanging plants and dying plants. Which gave the idea and vision even more details and color. As you start seeing all the elements, feeling all the elements, the image in your mind just gets clearer and clearer. Now I knew the type of plants I wanted use inside the set. So moving on I now needed to make a:

So I got 4 pieces of triplex wood sized 2,50 by 1,50 mtrs. Together with my assistant we nailed some legs on them so they could stand. Got paint and painted the 3 walls and floor green. It took about 1,5 hours and a few coats of paint. So while doing all this building and painting, I knew straight away that it was not going to be an option to change the box during the shoot.

Painting, waiting for that to dry, then styling was not going to work. So I needed to build a second box. This is also where i dropped the idea of having one where it rains completely. I tried fitting it in, couldn’t. And I couldn’t afford a 3rd box. Off we go! Back to the hardware store, more wood, more leg nailin’ and intern abusing.

But now!! I could actually see the 2 boxes together. Which was cool! 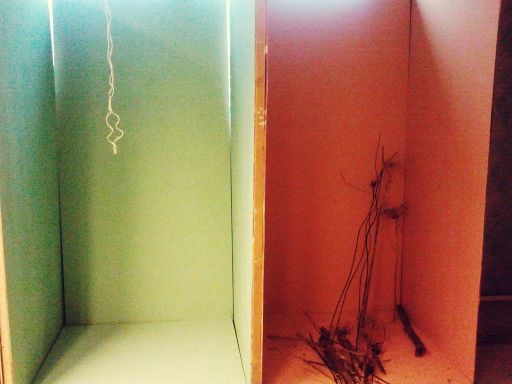 From here on it was a matter of gathering all the plants and placing them inside the box.

My assistant and I went for a bike ride to gather everything. Went to parks, woods, and dragged everything to the studio in pouring rain autumn weather. And we filled the boxes. 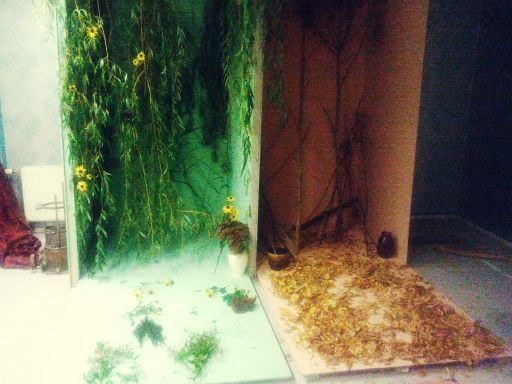 Around this time my mind started figuring out the styling for this shoot. What would the person be wearing? How did I want it to feel?

So I asked the model to bring in a few pieces of clothing, but we wanted to keep in simple. For the green box we wanted the emotion to be happy, open and joyful. So we went with white top and no pants and bare foot. This gives it a free spirit nature feeling.

For the brown box, we went for black- not just because it’s the opposite of white.

It was because of the longing, sad feeling that is almost grief like. Black would reflect that emotion the best.

Then it was on to the last part:

I used the same lighting on both boxes with a small adjustment on the backlight. 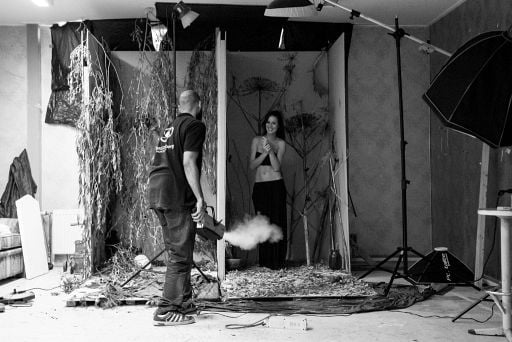 We shot two photos and composed them in post using the same model with different outfits and emotions. 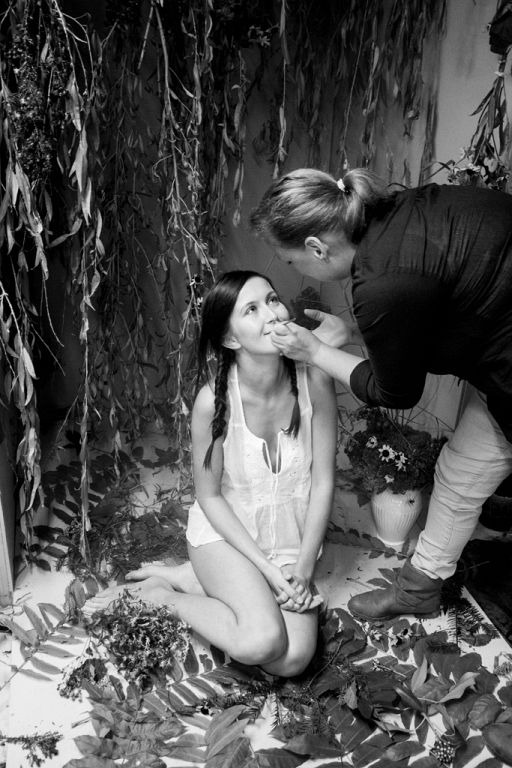 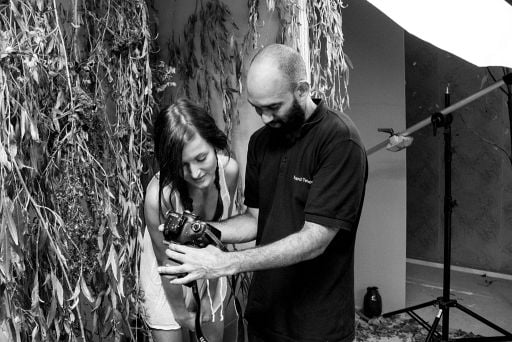 Here is that Final Image again

His background in media and design helps his overactive brain keep up with the many things he does at the same time. Add a drive for getting people to ‘stop talking and start doing’, and you’ve got this guy in a nutshell. You can follow Richard’s excellent work through those channels: Facebook, Twitter, Blog, Instagram & 500px.

How To Build A PVC DIY Photo Light Box

How to build a cheap collapsible DIY light box