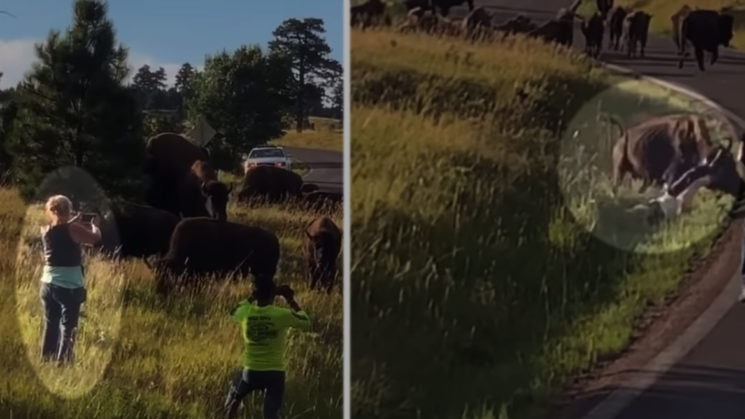 A woman recently got attacked by a bison at Custer State Park in South Dakota. Maybe you can already guess how the incident happened – she got too close to the animal because she wanted to take a photo. Fortunately, the woman didn’t suffer any life-threatening injuries. It’s pretty incredible: it was her pants that saved her life because they fell off.

The incident happened last Wednesday within a group of motorcyclists who were in the Black Hills for the Sturgis Motorcycle Rally. There was a herd of buffalo on the road so the riders stopped. Many of them took their phones out and started filming and taking photos. But one woman got way too close to the animals. It was an incident waiting to happen, and one of the folks from the group caught everything on camera.

A bison rushed towards the woman and gored her. Luckily for her, the animal caught her by the pants, causing them to fall off as it violently swung her around. In the video above, you can see people rushing to help the woman. Fortunately, both she and the bison were unharmed. One of the rangers even managed to retrieve her pants.

Custer County Sheriff Marty Mechaley reported that the victim is a 54-year-old woman from Iowa. He confirmed that she was “apparently saved when her pants came off.” He also said that the bison that attacked her ran off along with the rest of the herd, and you can see that in the video as well. Mechaley added that visitors “should stay in/on their vehicle and keep a safe distance from buffalo.”

If you think that this story sounds familiar – that’s because a very similar incident happened earlier this year. And no, this isn’t the same story, believe it or not. I’m glad that the woman was not seriously injured, and I sure hope that she learned not to get too close to wild animals.