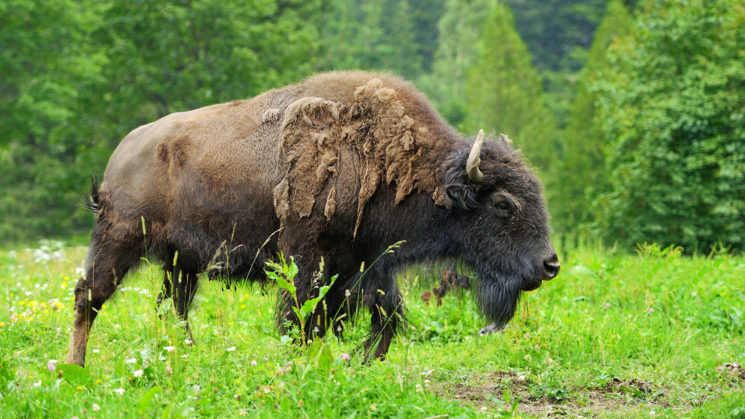 According to a press release from the National Park Service, a 72-year-old unnamed woman from California has been gored by a bison at Yellowstone National Park. They say she got within 10ft of the animal “multiple times” in order to try to shoot a photo of it.

There is no news on the woman’s condition, but they say she sustained “multiple goring wounds”. After rangers provided immediate medical assistance, she was flown via helicopter to the Eastern Idaho Regional Medical Centre.

The series of events that led to the goring suggest the bison was threatened by being repeatedly approached to within 10 feet,” said Yellowstone’s Senior Bison Biologist Chris Geremia. “Bison are wild animals that respond to threats by displaying aggressive behaviors like pawing the ground, snorting, bobbing their head, bellowing, and raising their tail. If that doesn’t make the threat (in this instance it was a person) move away, a threatened bison may charge. To be safe around bison, stay at least 25 yards away, move away if they approach, and run away or find cover if they charge.

At the moment, the incident is under investigation and the National Park Service has no additional information they wish to share.

The park’s been open less than six weeks since it was closed as a result of the coronavirus pandemic, and it’s not the first incident since the park reopened, either. Only two days after the gates opened back up, another woman was injured by a Bison at the park.

So, remember your social distancing, folks. It’s not just for other people. The NPS recommends staying at least 25 yards (23 metres or 75 feet) away from large animals that can send you to the hospital (bison, elk, bighorn sheep, deer, moose and coyotes) and at least 100 yards (91 metres or 300ft) away from the ones that can kill you (like bears and wolves).