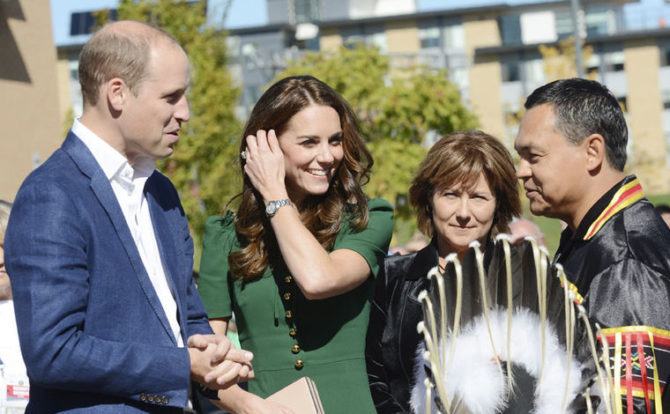 The Duke and Duchess of Cambridge were ever so kind to drop into Kelowna as part of their royal tour of British Columbia and the Yukon this week. Here is a behind the scenes report on their visit. This is a bit of a long post, so you may need some time to sit down and read this one.

First I want to mention that I first needed to get accredited, and that is no easy matter. My editor had to fill out a very long and bureaucratic government form, this included a copy of my driver’s license and a letter of assignment from the newspaper that I work for with company letter head, I suggested he write “I hereby assign Gary Nylander, Kelowna Daily Courier staff photographer to photograph the Royal Highness’s, the Duke and Duchess of Cambridge on the 27th day of September, 2016 in Kelowna, B.C.” I’m not sure if that’s what got written but it was a fun suggestion.

Anyway last week I was officially notified by the Canadian Heritage office that my accreditation had been approved, and it would be ready for pick up, a day before the event, while picking up the accreditation badge with a nice “W” logo with a crown above it, I was warned not to post any images of the badge on social media, no problem there as my mug shot picture is so ugly its not something I would want to share with too many people anyway.

The big day arrives, the royal couple descended onto the tarmac of the Kelowna Airport and with my pass securely slung around my neck with chain lanyard I headed off to catch the media bus at a local hotel in Kelowna that would take me to UBC Okanagan campus. The bus was to leave at 10:15 am sharp, I got there in plenty of time so I wouldn’t be late, and the bus did leave right on time. First stop was over to Kelowna International Airport to pick up some more media types that had just flown in, later I met up with a photographer from the Sun newspaper in England who had been with the paper for 40 years, he was in Kelowna when the last royals visited Prince Charles and the late Lady Diana. By now the bus was getting full with photographers sporting al sorts of big long lenses. Soon after the bus was in gear and rumbling on down the highway for short drive to the nearby UBC Okanagan Campus. 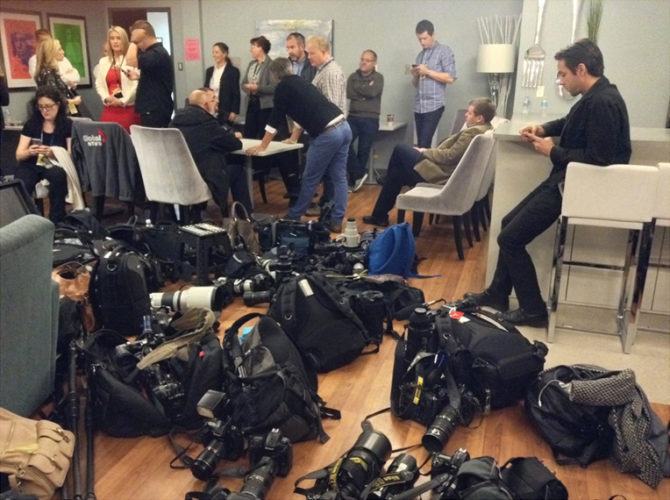 Upon arrival at the campus we were directed and led to a media waiting room in the administrative building of UBCO, here we were asked to leave our equipment on the floor and soon a RCMP bomb sniffing dog would be come by to check out our equipment and make sure it not rigged in some illegal way, so we awaited for some time, then we found out that “Fido” was taking a break as he had been doing a lot of sniffing and would need a few minutes of down time to recharge his/her sniffing abilities, soon with the police dog rested and ready for action we were herded out of the room while the dog did his sniffing business, the “okay” clear was given and the media was allowed to pick up their equipment, whether it be cameras, or tripod, or audio recording equipment, there must have been a few thousand dollars of gear spread out on the floor I have never seen so much high-end camera gear.

Now let me talk a little about how things work logistically, one cannot just wander around at leisure, whistling dixie and go where ever one feels like going thinking that the media credentials will let one go where ever he/she chooses, oh no its nothing like that at all, its all very controlled with assigned photo shooting positions, which are all roped off, the size of a normal car parking spot along a city street which might need to fit up to 30 to 40 photographers. Further more one has to choose before hand which shooting position one might like and once you are there you are basically locked once the royalty arrives. I saw one reporter who decided to escape her “pen” a female RCMP officer barked “You, Reporter, come back here!” as one of her colleagues went to chase her down, she came back head down muttering something about how she almost made her escape. 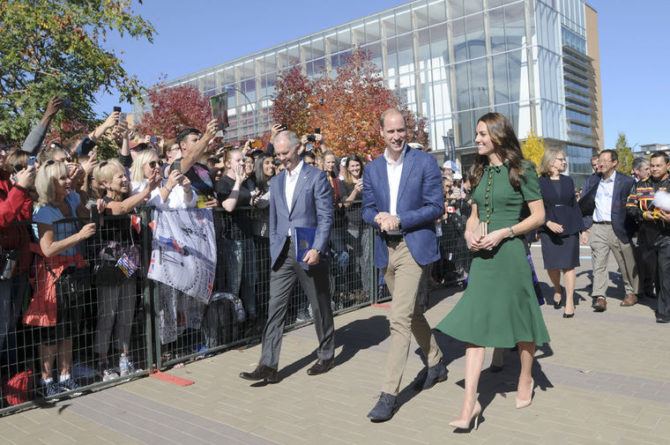 Oh yes there is one more thing, there are the “pool” photographers and videographers , they get to walk outside the roped off areas, but there is a limited number of them who can be in the pool so to speak, but they do get some great opportunities to get some better photos, just by the fact that they have more maneuverability.

In the case of the photo coverage of the UBC Okanagan, I had a three options open to me, I could take a position near the road which runs through the campus, where the royal couple would be getting out of the car and greeted by the dignitaries including the chancellor of UBC, also there were throngs of people along a gated corridor that the royal couple might like to greet. The second option was to be near a stage area in the middle of the courtyard where there would be some speeches another ceremonies as the Duke and Duchess watched. The third option was inside the gym where the Prince William and Kate would watch a volleyball demonstration.

If I chose the first option I could not go to the courtyard (option 2) but I could go to the gym (option 3) if I choose option 2 I could not go to options 1 or 3. I decided to go for option 1 and 3, I was hoping that when William and Kate got out of the car would interact with the crowds for a bit, as it turned out that was not the case unfortunately. Inside option 1 there were two shooting positions along a walkway, one of the left side further back and one on the right closer to the car, I chose the position closer to the car, when they did exit the car, they chatted with the dignitaries in the receiving line for maybe 3 or 4 minutes, it was only towards the end the of the line that I had clear view for any pictures, after those formalities were over they strode right on past me with out stopping, I went click, click, click and grabbed a few frames of them walking past, one of which destined for the front page of the next day’s paper. 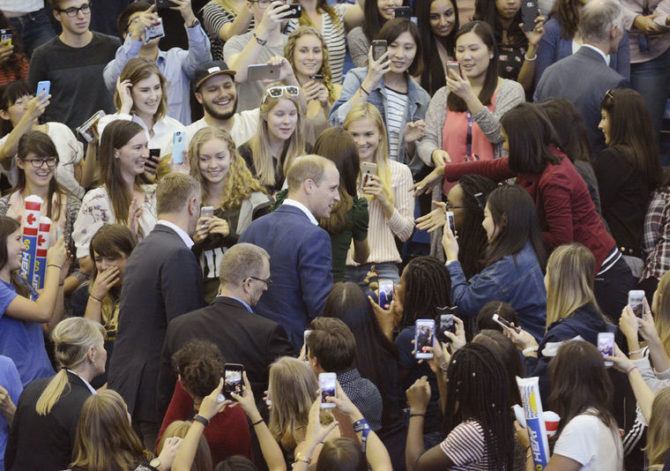 With that very fast opportunity gone, we were being hustled and I mean hustled, have you ever see those speed walkers in the Olympics? That’s how fast we were walking to get over to the gym, we were given 17 minutes to get over there and get in position. Once over there we were once again given a number of options of photo shooting positions, the best were on the lower floor but those were mostly filled by the media that had chosen option 1 from the get go, by the time that I got there I was left with the shooting positions from the upper deck which turned out to be not bad, although I didn’t get a good view of their faces during a presentation ceremony by the UBC Okanagan Heat Volleyball team.

Soon the demonstration and ceremonies were over and the Duke and Duchess were waving their good byes and the crowd was going wild with cell phone cameras saluting them as they made their way up the bleacher steps on to their next stop on their trip to Mission Hill Winery in West Kelowna. 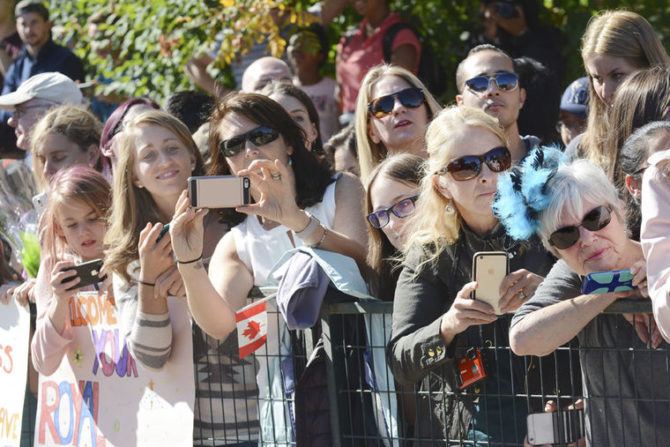 Before I wrap up with this rather long post I was also going to explain a bit about the logistics of covering two events, UBC Okanagan and the Mission Hill Winery venues are quite far apart at least a 40 minute drive on a good day, with one photographer ( me ) and the time involved of going through security screening and having to be a each event 2 hours ahead of the scheduled time of each event, there was no way I could get over to the Mission Hill Winery event after the UBC Okanagan event had wrapped up as I would have had to be at Mission Hill Winery at 12 noon for my pre-security check before the royal couple had even arrived at UBC Okanagan. The Daily Courier accredited a total of four people, myself being the only photographer and three reporters who each took cameras, myself and another reporter covered the UBC Okanagan event while two reporters went to the Mission Hill winery event.

I ended shooting over 920 images plus there was the photos from the reporters which made for well over a 1100 images to go through and edit, which includes lightening/darkening, color balance of the chosen images, plus write cutlines, I ended up getting the final take down to 40 plus images for The Daily Courier. A busy long day, also great fun but was glad that it was over.

You can see more of my pictures of the royals in Kelowna on the Daily Courier website.

Gary Nylander is a photographer for local daily newspaper The Kelowna Daily Courier in Kelowna, B.C., Canada. You can find out more about him on his website, follow his adventures on his blog and Facebook, or reach out to him through Twitter. This article was also published here, images Gary Nylander/Kelowna Daily Courier, shared with permission.

Epic Behind The Scenes Footage On Making This Enchantingly Detailed Photo
« Couple fight Cancer through photography in an underwater project
Lensbaby President talks about the company past, present and future »