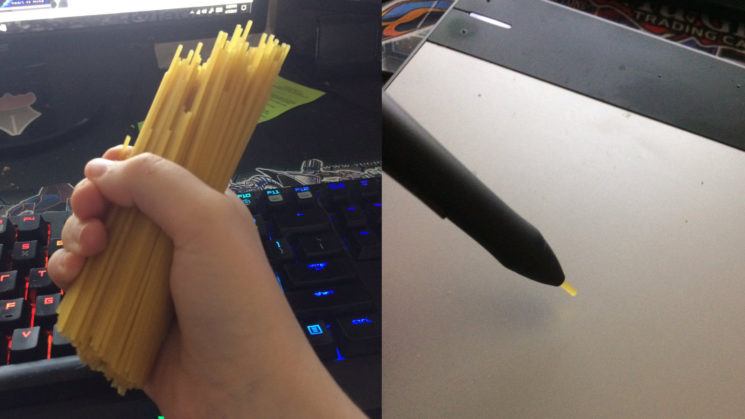 It started as a simple joke. Creating a meme for a bit of a laugh. Brittany Botehlo is an 18 year old self-taught digital painter in Dallas, Texas. When recently cooking spaghetti, she decided to stick a small piece in the end of her Wacom tablet pen. And, why not? It’s an amusing idea.

It turns out, though, that there was a little more truth to this joke than expected. Twitter responded to her post asking if it really works. Can you really replace a Wacom nib with spaghetti? Apparently, you can, and Brittany posted a video to prove it.

This was the initial tweet that spawned a slew of responses on Twitter from users curious to know if it was real. I mean, it does seem a little far fetched.

WAIT DOES THIS REALLY WORK THO

This is genius. Infinite nibs.

And a couple even spawned years of joy.

There were one or two doubters, though, to which Brittany responded with video evidence.

Brittany told Buzzfeed that it “works pretty well” and has used it a few times to try painting with it for fun. This drawing, for example, she says had most of the face, hair and most of the details created with it.

So, if you’re a “broke artist”, or you’ve just ran out of spares and your nib breaks at 2am, you now have another option. I wouldn’t rely on it long term, though, and I certainly wouldn’t use it on a Cintiq screen!

Breadbox Strip-Light From A Plastic Bread Container, Spaghetti Sauce And A Twelve-Pack

Two DIY backdrops that will save you both money and space

« How to learn filmmaking in a month or less without film school
Whenever you’re in doubt, here’s why you should just go out and shoot »