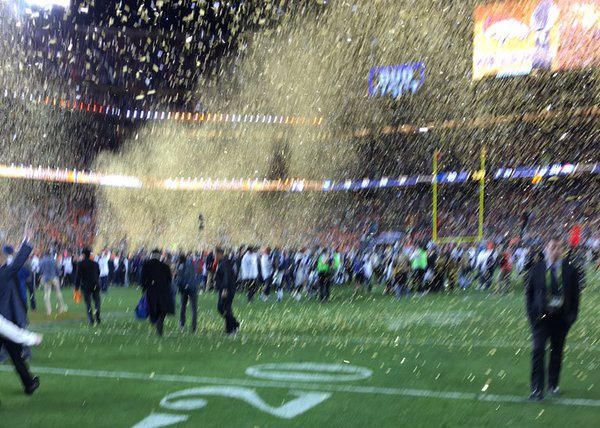 While Peyton Manning will be remembered as the star of last night’s unforgettable Super Bowl 50, Tim Cook has been receiving a fair share of attention after sharing a photo from the game.

Unlike the Broncos’ quarterback, however, Apple’s CEO probably won’t want to remember this event, as the snide comments poured in criticizing his company’s camera’s capabilities.

Looking to get a bit of free PR for Apple, or perhaps just sharing an amazing experience like a normal person, Cook tweeted a blurry photo of people on the field after the Super Bowl 50 ended.

Most people could get away with such a photo, but not the CEO of one of the worlds’ leading smartphone manufacturers.

As you can imagine, the mocking comments were quick to arrive:

@tim_cook @Broncos was that taken from an iphone? Jeez I hope not Tim.

It’s assumed that Cook used an iPhone 6s to capture the image, and some Twitterers made fun of Apple’s “Shot on iPhone 6” campaign:

@tim_cook @Broncos I don't think shot is going to make in the shot with #iPhone compaign.

As some might remember, we’ve previously shared a clever parody mocking this campaign, though it included better photos than Cook’s.

Perhaps Cook should send this photo to the 800 engineers Apple has working on the iPhone’s camera; it looks like they’ve got some work to do.

An hour or two later Cook tweeted another photo; but this time he made sure it was sharp:

« Short Video Pokes Fun At Useless Photoshop Tutorials
How To Throw Flour At A Model While Keeping the Studio Clean (Hint, by Cheating) »