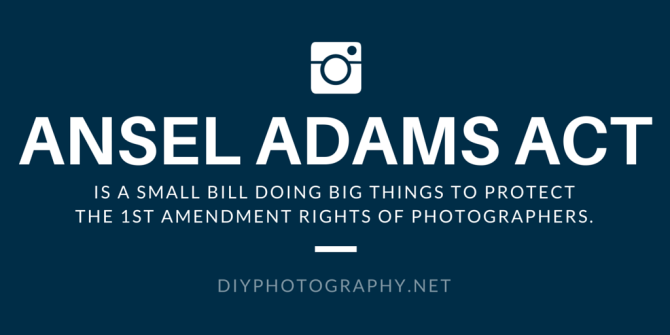 In the United States, the work of photographers and photojournalists is protected under the 1st Amendment which states: Congress shall make no law respecting an establishment of religion, or prohibiting the free exercise thereof; or abridging the freedom of speech, or of the press; or the right of the people peaceably to assemble, and to petition the Government for a redress of grievances. And, in a perfect world, the constitutional rights granted by the amendment would never be violated. But, perfect the world is not and it seems like photographers are being unjustly accosted on a regular basis.

Think of all the news stories you’ve read that pretty much read the same: a photographer from Any City, USA was arrested, threatened with arrest, threatened with seizure of equipment, or otherwise harassed for exercising their First Amendment right of taking photos in a public place. A quick search on DIYP alone using the “Photography Is Not A Crime” keyword yields you a dizzying amount of such stories. Not to mention the motions made by the Federal Government, which restrict and sometimes prohibit photography in National Parks.

I’m willing to admit that not every single case of harassment towards a photographer is unjust. In reality, there’s always that one jackass who ruins it for everyone, but a good number of these types of cases violate the rights of photographers and, quite frankly, we’re fed up.

This is exactly why Steve Stockman, a Representative from the state of Texas, has brought forth the Ansel Adams Act with the sole purpose  of restoring the First Amendment  Rights of Photographers. Introduced to Congress on January 2, 2015, the Ansel Adams Act clearly outlines the necessity for transparent clarification and enforcement of photographer’s rights. It states in part:

(a) In General.–It is contrary to the public policy of the United States to prohibit or restrict photography in public spaces, whether for private, news media, or commercial use.

(b) Should a Federal agency seek to restrict photography of its installations or personnel, it shall obtain a court order that outlines the national security or other reasons for the restriction…

(c) Prohibition on Fees, Permits, or Insurance.–No Federal Government agency shall require fees, permits or insurance as a condition to take still or moving images on Federal lands, National Parks and Forests, and public spaces, whether for private, media, or commercial use.

The entire Ansel Adams Act is available to read on Congress.gov. It’s only about a page long and is surprisingly easy to read. Definitely  worth the few minutes it would take to read so be sure to click the link or at least save it to your reading list. Especially if you are a US citizen or a photographer who photographs in the U.S.

Upon introducing the bill to Congress, Rep. Stockman’s bill was referred to several committees, including the Committee on Oversight and Government Reform, where it will be held for consideration for a period of time that is to be determined by a respective Speaker of each committee.  Stay tuned as we will be delivering updates on this very important bill as they develop.

« How Do You Compare To Famous Creatives And What Does It Say About Your Own Creativity?
Create epic rain effects with this $15 rain machine »