UPDATE: for some still image and a note from the creator, scroll to the bottom 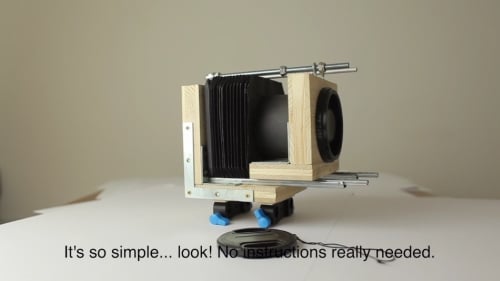 Here is the problem, anamorphic lenses are kinda rare and expensive. Used anamorphic projection lenses on the other hand are bearable.

Enter vimeo user A. Safari with a DIY adapter for anamorphic projection lenses. While the project is very specific the instructions count on you to have some understanding in makering and hacking, as they involve opening and “chopping off” the projection lens, and making an extremely precise housing.

Just got a sweet mail from the creator of this lens, here is what he had to say + some great images.

“While the resolution gain aspect is rather secondary to me (because you also lose some quality by adding optics in front of taking lens, which evens that out), I would encourage using anamorphic lenses just for the sake of the certain cinematic look that they generate. It is the bokeh that gets twice vertical as horizontal, that gives a certain feel to the image. It is very subtle, but look also to the one I shot with a 16mm Kowa, and see how different it is compared to a normal photographic look” Safari