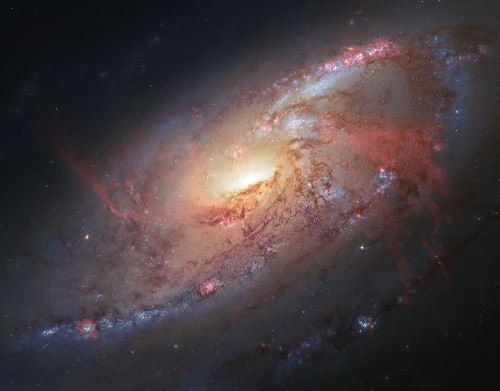 Here is what happens when great talents are combined with great resources. Physician and astrophotographer Robert Gendler was granted access to the Hubble Space Telescope archives (actually we all are)

Instead of stitching an image made solely from the Hubble data, Robert filled in the blanks with photographs he and a fellow astrophotographer taken in New Mexico. The result is a glorious photostitch of the M106 galaxy.

Here is how Hubble Site describes it:

“Gendler retrieved archival Hubble images of M106 to assemble a mosaic of the center of the galaxy. He then used his own and fellow astrophotographer Jay GaBany’s observations of M106 to combine with the Hubble data in areas where there was less coverage, and finally, to fill in the holes and gaps where no Hubble data existed.

If you wanna get better orientation as to where the galaxy is located, here is a zooming view into the galaxy. Or a zoomable view over at HubbleSite.