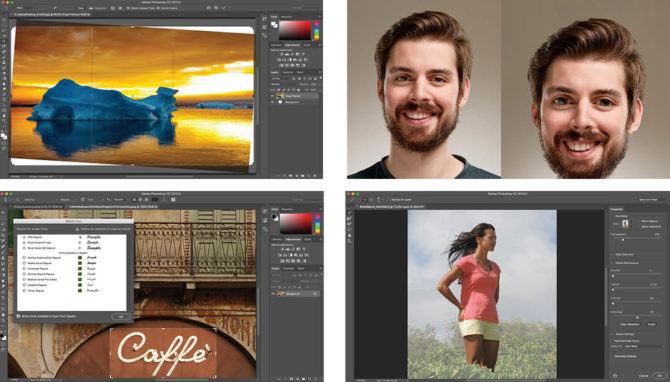 Today, Adobe finally unleashes an update that many users have been waiting for. As well as giving us back the Legacy Healing Brush, this update to Adobe’s CC2015 suite of applications brings some great new features to Photoshop, After Effects, Premiere and other applications.

We’re going to look at some of these new features, and thanks to the folks at the Photoshop Training Channel on YouTube, you’ll find out how they work.

First up, Photoshop, and the big one. Face-Aware Liquify. This is going to make a lot of people very happy, especially wedding and family photographers who often have to deal with scowling children or bored relatives.

Sure, we’ve had the regular liquify for a while now, but this will make it a lot easier to tweak a smile, or raise a cheek without distorting the whole face.

One feature that we got a sneak preview of not too long ago is Content Aware Crop, which allows you to crop outside your image, and then automatically fill in the gaps. Stephen Nielson did a great job of explaining it to us then, but here’s a quick refresher for those with short memories.

There’s also a new “Select and Mask Workspace” in Photoshop that replaces the refine edge and refine mask dialogue boxes and offers some new ways to select and cut out your content.

I’m not sure how much of a regular use feature this next one is going to be for most people. It’s certainly something I could see coming in very handy from time to time and that’s the Match Font feature.

It’ll certainly make life a lot easier when a client brings you something and says “Can you make the text look like this?”

After Effects gets a bit the update, too, with performance improvements and updated Character Animator tool. This simplifies matching an animated character to a real actor’s speed and movements in real time. This latest update was tested by The Simpsons‘ animation team, who used it for Homer’s recent live Q&A session.

Premiere Pro also sees a pretty big update, with lots of tweaks, fixes, additions and new virtual reality features, including a “field of view” mode which makes it easier for editors and filmmakers to preview footage and see what the viewer will see.

This should come in very handy now that 360 degree 3D video is starting to become more of a thing on YouTube and Facebook.

There’s far too many features, fixes and tweaks to list here, but if you’re a CC user, update now to start using the new features. If you’re just interested in Photoshop, and not so much into the video side of things, here’s the summary from Adobe.

Which features are you most looking forward to trying out? What do you think they’ve missed or still need to fix? Let us know your thoughts in the comments.