So after the madness that was hurricane Photokina, I am trying to re-adjust to normal life, hence a short post for you this week, as my body and mind recover! This weeks post is focussing on creating depth in your images.

I was recently speaking to a friend on the subject, and came to the conclusion that depth can be achieved with two simple techniques. One, lowering the contrast of your background to create arial perspective, and two, by adding some blurry foreground elements. This, I know is over simplifying it greatly, but it works. Be cautious though, you don’t want to randomly add elements into the foreground that make no sense, it all has to tie in with the image. Also try to be original, if I see another image with pieces of paper scattering in the air, or rose petals for that matter, I may have to come round to your house and slap you with my Wacom tablet!

So let me give you a quick example. I had to create an image for the Christmas Dark realm collective art pack. I decided to go with an evil Santa theme. I usually start with the background first when creating a composite, as it is always easier to shoot the model to match the light in your background. 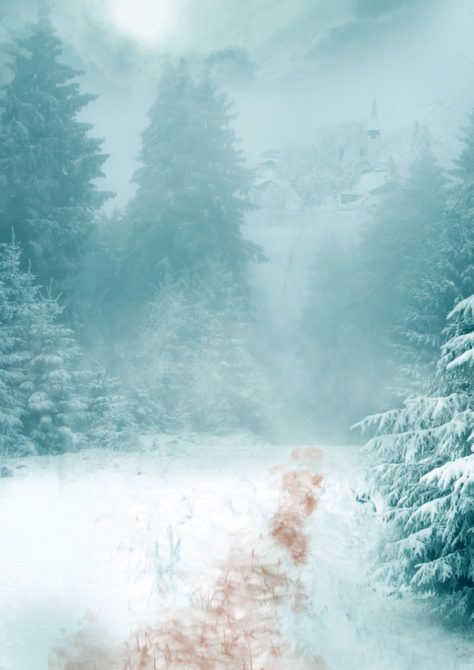 I created the background using a mixture of stock images from Deviantart and Pixabay (around 5-6 images). As I knew the model would be stood in the middle of the image, the background contrast had to be lowered for the model to stand out using the GAC (greatest area of contrast technique), but also to create Aerial perspective. Aerial perspective is basically our perception of depth in the atmosphere, where the contrast between planes in the distance creates separation. With the background contrast reduced I placed my model into the image. 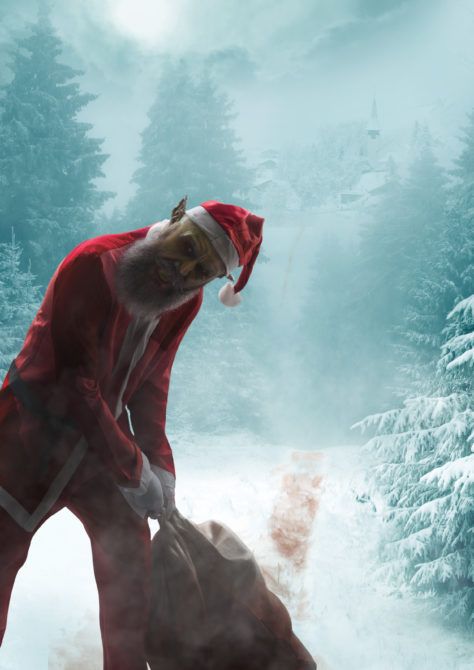 With the difference in contrast, I added a little mist to the foreground, my thoughts were this would suffice. But as I stared at the image, something didn’t sit right. It still didn’t seem to have the depth I was looking for. It needed a prominent foreground element or elements to give it that feeling of the third dimension. When you add the foreground element, as I said, it needs to fit in with the story, so I came up with the idea that someone was witnessing this scene, hidden in the trees. As I now had my angle, and a cool twist to the image POV, it also meant my foreground element could be some tree branches. All I had to do was select some of the branches from the stock images I used for the background, with the quick selection tool. The mask didn’t have to be spot on as the foreground elements are usually out of focus. 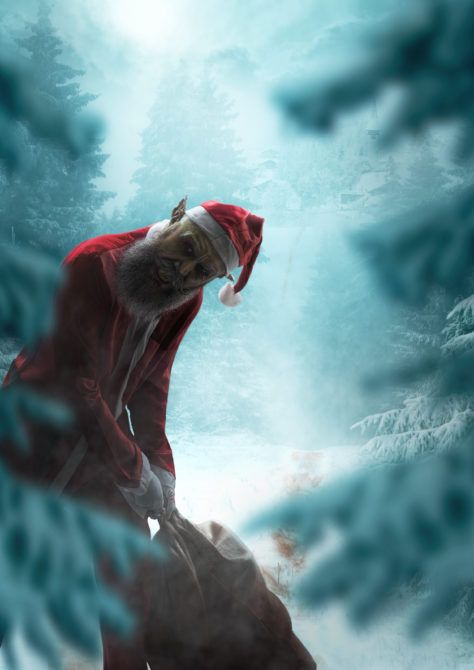 The image now pulls you in to the story visually, but you are also more connected emotionally because you are seeing it through the protagonist’s POV. Your eyes scan the background, but always come back to the main focus (the evil Santa) due to the lower shift in contrast surrounding him. It is these subtle changes that can make a difference to your art. Always try to add depth visually, and even metaphorically and your work will begin to stand out.

« How to fake the 2 stops magic bullet in Photoshop.
Shooting a 300MP photo of a Hotrod – full frame digital vs large format film »