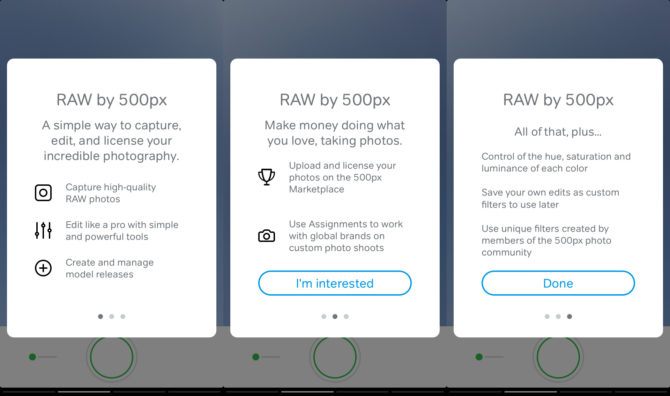 It’s an interesting app, and one I’m curious to see how well it will take off. The new raw capabilities of iOS10 are great. Are enough people going to be shooting to sell with their iPhones, though? Even with the iPhone 7 Plus’s eventual new feature to simulate shallow depth of field, will people buy the images?

Nevertheless, the app is here, and it could turn out to be pretty cool. To begin with, it’s, obviously, a camera application. It offers the typical automatic exposure we’d expect. The app also allows for manual control. It won’t give it to the same degree as something like Camera+ or 645 Pro. It does let you dial in some exposure compensation, though.

It’ll also let you tweak the contrast, enable or disable the flash, overlay a rule of thirds grid, or setup a timer delay. If shoot with something a little more advanced, it will also pull images in from your camera roll.

Once you’ve shot or imported your image(s), you can then tweak them from within the app.

You get the usual array of Exposure, Contrast, Highlights, Shadows. Followed by colour correction in the form of Temperature, Tint, Saturation and Fade. Then you get a little more creative with Clarity, Sharpening, Grain and Vignettes. Finally, you can adjust the Hue, Saturation and Luminance of various bands of colour.

Like the camera app itself, you might want to consider using something else to makes this job a little easier. Perhaps Lightroom Mobile, which was also just updated to take advantage of iOS10 raw capabilities.

One feature that’s a little more unique to this app is that it has a built in model release. You tap to add a new release. Then, you enter your details, enter your model’s details, and add a photo of your subject. 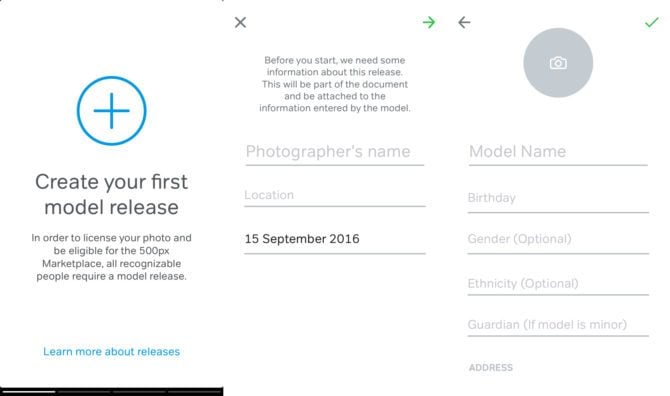 Once all the details are filled in, you tap a button, and a box comes up where your subject can scribble their name across your screen. 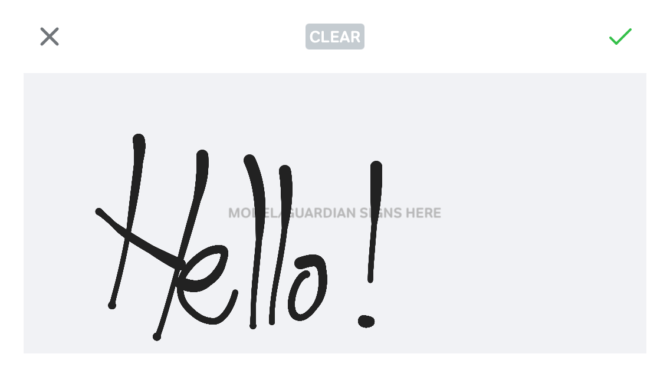 Once signed, you can then email out a PDF to anybody who requires it. Presumably, it is also automatically uploaded to 500px along with your images. One thing that’s a little annoying is having to enter your location for each release as the photographer. It remembers your name, why can’t it remember your location? For those who shoot studio or regularly in the same area, this could get a little bothersome. I suppose it’s a small price to pay, though, to have this built right into the app.

It’s not a generic release app, though. You can’t edit the release, and it specifically mentions 500px (big logo at the top, and “500px Inc.” written at the bottom). So, if you’re planning to use your images in places other than 500px, you’ll still want another app. I get that it’s for uploading to 500px, but if we’re emailing these out to people, it would be nice if we could at least brand them with our own logos instead of 500px’s.

If you do use an external app, there seems to be no way to import them into 500px Raw. Having to have your subjects potentially sign multiple apps and read through several different releases isn’t optimal.

I’m not convinced that the iPhone is the best way to shoot and process images you hope to sell. If you’re shooting a DSLR or mirrorless, though and transferring images to your iOS device, then it could be quite useful. It certainly makes it a lot easier to shoot, upload and start selling if you’re away travelling and away from your computer for a while.

You can download 500px Raw from the Apple App Store.

What do you think? Is this aimed more at those shooting “real cameras” and transferring to iOS devices? Or do 500px actually expect people to shoot images with their phones to sell? Are you selling your cellphone images? Let us know your thoughts in the comments.