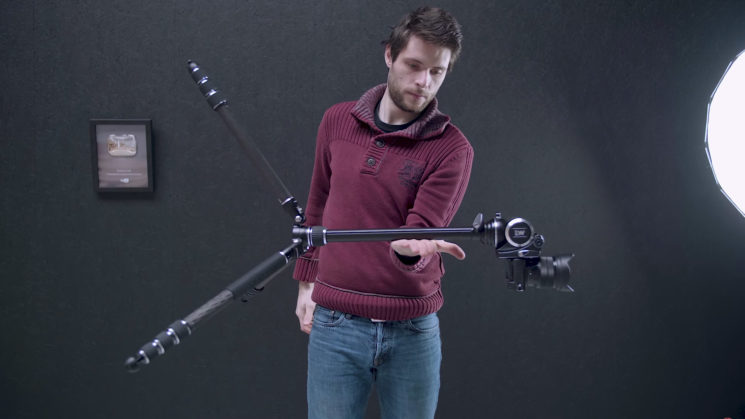 It’s rare that I actually see new ways to utilise a tripod. When these videos pop up, they’re invariably just a rehashing of somebody else’s tips and tricks. It’s not that I think I’ve seen or know them all already, but it’s just rare that I see something new. Maybe you have seen or even attempted these techniques before, but I haven’t.

This video, though, from Cinecom, takes us through five great ways to use a tripod that you might not have considered before. Specifically, the tripod shown in the video is the MeVIDEO Travel Tripod, but these tips can be used or adapted to work with just about any of them. I’ll definitely be trying out a couple of these

This is the shot shown in the video thumbnail above. It does require being elevated higher than your subject and at the edge of a wall. Essentially, you lower the tripod over the wall, and rest two legs on the wall’s surface. Then you use the third leg to raise and lower your tripod, to add some motion to your shot.

The propellor transition is a technique involving a pair of shots. As the name suggests, it allows you to transition from one shot to the other. It works by pointing your camera upward, but then balancing the tripod horizontally while holding the centre column. You spin the tripod at the end of your first shot, and the beginning of the second. You cut between the two in post, et voila!

The lift shot’s another one you want to be up high for. Fortunately, though, you don’t have to be hanging over the edge of a wall as shown in a video. You can also do this one from up a ladder quite easily, too. Just be careful, and make sure you have somebody to hold it.

I’ve used a monopod as a shoulder rig before, but not a tripod. My tripods have always just been too damn heavy in all the wrong places. I do have a Manfrotto Element Carbon now, though (review coming soon), so it might be time to give this a go.

5. Mounting lights to it

There is a certain advantage to using a light on a tripod instead of a typical light stand, especially if it’s a video tripod. It’s a great way to have an animated light in your shot, if you’re shooting video. To either follow a subject, or simulate car windows passing by a window, for example. It can also work well if you want to do some light painting for long exposure photography, too.

You could also use it to animate lights that are in the shot to create particular effects, as shown here with the Spekular star adapter.

Some great ideas to try. I think I’m going to have to figure out a way to get that lift shot on location.

The Best DIY Project Of Them All – Your Project