I am not sure if the Magic lantern team are wearing shoes, but if they do then the other show just dropped. 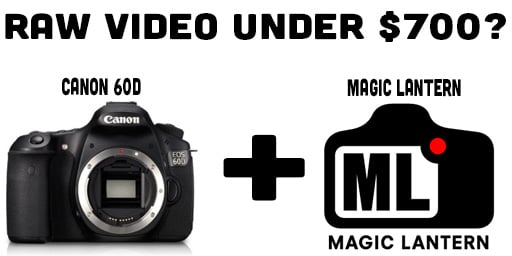 One of the more common requests coming after the 24p RAW video hack with the 5DmkIII was “I would love having this on my ($700) 60D“. Well, last night marekk of ML released the following statement:

“Hi all 60D users :)
I prepared special version of autoexec.bin like 550D user mk11174 and RAW video works now on 60D :) This ML version has only few options enabled. I’ve got no skills to fix 60D’s boot problems with full ML package with modules and tcc enabled so I removed everything except ability to record raw videos and load modules.“#

This is great news, bringing the possibility of raw video to a camera under the $1000 price tag (comparing to a $3300 5DmkIII). More info and videos after the jump.

As with the previous raw video hack, this hack is only capable of recording a short video clip (about 10-15 seconds long, depending on card speed and settings) but if the route of this hack is similar to the one of its predecessor, things will improve and longer sequences will get enabled.

The build is not stable yet (which means it enables only some of the ML custom features and it is not bug free) but it was test driven by some users already and quality reports are encouraging. This also means that you should probably not test this build, if you are a novice ML user. As marekk states: “TRY AT YOUR OWN RISK“

There were two notes on that forum that are worth getting some attention, both from marekk

Here are some sample videos from the 60D:

You can follow the test and announcements as they roll on the ML 60D RAW video – it’s working !!! forum thread.

The Quickest Workflow To Get 24P Raw Video On A 5DmkIII

« Dear Canon/Nikon/Panasonic Can I Use Custom Firmware With My Camera?
Using CHDK For Quadcopter Aerial Photography »