It sort of hit me from out of the blue the other night. There I was– hanging out on the couch, watching a hockey game, when I realized I’d forgotten all about my anniversary. Thankfully, I’m not talking about my wedding anniversary, a fact which should be obvious since I’m still alive to tell the tale. No, this was my other anniversary. With the holidays and wrapping up all my end-of-the-year stuff, the tenth anniversary of ditching my law career for one in professional photography had somehow slipped past me.

I mentioned it to my wife, who muted the television, looked at me, and asked, “So– what have you learned in ten years?”

The question caught me off-guard, but it got me thinking.

“I’ll have to get back to you on that,” I replied.

So, after much thought, I started a list of lessons learned over the past ten years. It is by no means complete, but here are ten entries from the list that particularly stand out for me. 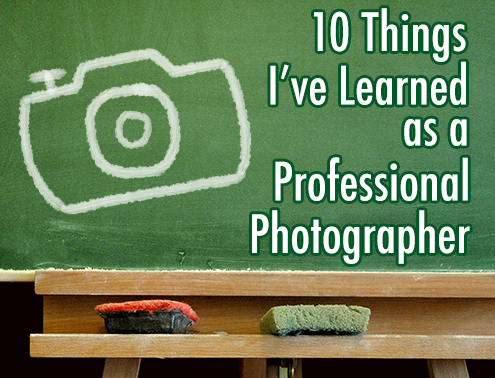 This is one of those “can’t-stress-enough” lessons. Back up a shoot before you edit it. Back up the edits once they’re done. Back up your entire catalog periodically. I even back up my back-up once a month and store it off-site. Have I mentioned that I can’t stress this enough? When it comes to storage media, there are two kinds of people– those who have experienced a data crash and those waiting for it to happen. Into every hard drive some scrambled ones and zeros will eventually fall, so be prepared. This lesson was learned very early on, not due to a drive crash, but due to laziness. Coming home late from a wedding shoot, I decided I’d wait until the next morning to download the cards. In doing so, I accidentally missed one and had reformatted it before catching the mistake. A recovery program only retrieved some of the images. Now, I won’t even leave the venue without backing up the shoot first.

We’ve all seen the ads or been contacted by potential clients who “don’t have a budget for photography,” but can guarantee you really great “exposure.” DON’T BE FOOLED! Exposure doesn’t pay the bills, put food on your table, or buy clothes for your 12-year-old son who eats everything in sight and won’t stop growing. You’d be shocked at some of the well-known magazines that try using this tactic. Nobody pays their attorneys, accountants, bartenders, doctors, mechanics, or tattoo artists with “exposure,” and they shouldn’t be pulling that garbage with you. If it sounds like an interesting gig and you want it for your portfolio, go for it. Just don’t be lulled into a false sense of security, expecting that giving it away just this once is going to bring great rewards down the road.

This was one of those lessons that I didn’t have to learn the hard way. Coming from the legal profession, I was shocked when I saw how many photographers weren’t getting deposits or even having clients sign a contract. This is part of what I was talking about when I said don’t work for free. Getting a deposit– if not payment in full– before the job not only protects your interests, but it also reinforces for the client that you are a professional and that your time is valuable. That will translate to fewer cancellations, as well as a fewer lost profits.

4. Learn to Calculate Your Cost of Doing Business

This is huge. When I sat down with my accountant at the end of Year 2, I was starting to feel pretty good about my new business. I had regular work coming through the door and just about everyone was paying their fees in a timely manner. After looking over my paperwork, my accountant looked at me and said, “What’s your Cost of Doing Business?” It wasn’t until that moment that I realized I had absolutely no idea what it was. Without it, my fledgling business would be destined to be a failing business. Knowing that number became crucial to setting proper fees and getting my business back on track. The American Society of Media Photographers has a great online calculator to help with this. 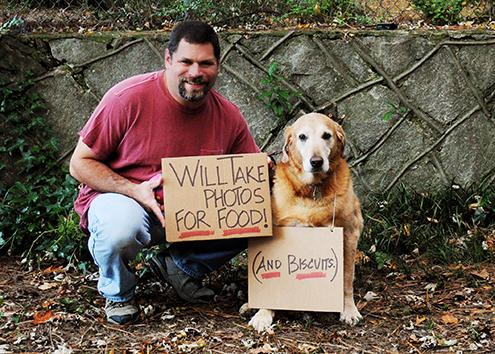 In other words, learn to only show your best work. It can be tough when you’re just starting out, because you want/need enough work to populate your new website. It’s more, though, than just making sure you don’t post six nearly identical photos of the same thing. I’m also talking about the task of sitting down with the 527 images that you’ve just downloaded, looking at your own work with an objective, critical eye, and whittling them down to the truly best of the bunch. In my opinion, this is one of those benchmark qualities that helps define the term “professional photographer.”

Being able to temporarily sever yourself emotionally from the work is not always easy, but almost always pays dividends. Showing a client only the best of the best makes it easier on the client when it comes to making their selections, and it also enhances their opinion of you. How? By showing them that you didn’t need 15 shots to get it right.

6. Shoot for Yourself Once in a While.

Don’t do it to build your portfolio. Don’t do it for advertising or social media. Try remembering what attracted you to photography in the first place. Get out and shoot. I don’t care if it’s two hours away or in your own backyard. Just create something without the pressures of clients, deadlines, and payroll. Photography has been a special part of my life for as long as I can remember. I didn’t want going pro to change that. Just because my hobby had become my career was no reason for it to lose its magic. Whether it’s once a week or once a month, it’s important to tune out the noise and the static and just shoot for the sake of shooting.

Networking with other photographers is important on a variety of levels. Whether it’s sharing ideas, referrals, critique, or knowing you have someone who can cover for you in an emergency, good relationships with other photographers are like insurance policies. But don’t limit your professional relationships to just other photographers. Get to know the people at your local camera store. When you find a solid print lab or album company stick with them. I can’t tell you how many times my print lab has rushed jobs for me at no additional charge, simply because I’ve been a steady customer and I know who to call. That’s not going to work if I’m constantly bouncing from one company to another, in search of the best deal. 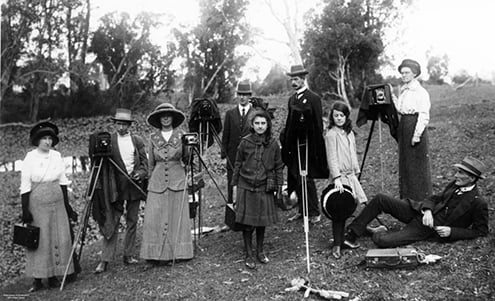 I’m sure this statement will draw the ire of some– if not many– but it’s true. Film shooters didn’t shoot RAW before transitioning to digital, and last I checked, many of them were actually quite talented before “RAW” applied to something other than food. Ansel Adams never shot RAW, nor did Diane Arbus, Henri Cartier-Bresson, or any of the other “revolutionaries” of photography. Is RAW a  more forgiving format? Absolutely. Does it give a wider range of editing possibilities? Yes. But if you are confident in your ability to get the shot right in the camera, feel free to make your life a little easier once in a while and shoot the much-maligned JPEG.

9. Learn to Use a Light Meter.

The argument could be made (and often is) that light meters have become superfluous in the digital age. The warm glow of an LCD draws us in like moths to a flame. We shoot. We chimp. We shoot. We chimp. We tell our clients we’re taking “test shots” while we push buttons and turn dials until we finally have the right look. The first problem with this approach is that your client is sitting there, getting increasingly impatient as you fire test shot after test shot. It makes us look like we don’t know what we’re doing. If a client loses confidence in me before I actually get started, it’s going to show in the photos. Metering your scene and your lights ahead of time means that you’re ready to go as soon as the client is.

Using a meter is also a huge help when dealing with multiple lights or light sources. Chimping alone is not going to help you figure out light ratios. Making sure that a high-key background shows up in photos as a sharp white instead of a muddied gray requires lighting the background a full stop and a half above the main and fill lights combined. The only way to figure it out quickly and accurately is with a light meter.

This business can be all-consuming if you let it. Getting the gig. Shooting the gig. Editing the gig. Delivering the photos. Blogging it. Tweeting it. Updating your portfolio with it. Advertising. Marketing. Networking. Workshops. Getting the next gig. Starting all over again. Never underestimate the power and ability of the people in your life to help keep you sane and get a decent night’s sleep every once in a while. They can be your lifeline, so while you’re depending on them, don’t forget that they’re depending on you. Put the camera down every once in a while to enjoy life and the people who support you.

3 things I’ve learned in 5 years as a photographer