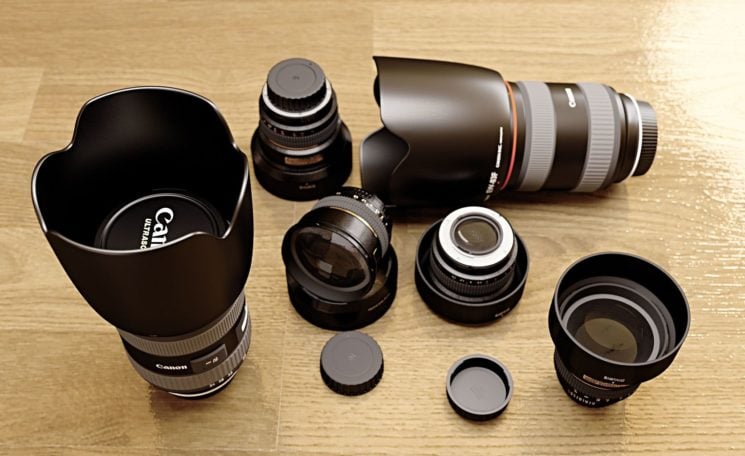 Is there even such thing as too many lenses? Well, I’m afraid so. If you suffer from the so-called Gear Acquisition Syndrome, at some point some of your many lenses will serve for nothing but collecting dust. But how do you know the time to sell them has definitely come? How can you be sure you’re never gonna use them? Let Michael The Maven help you to answer these questions. In this video, he discusses how many lenses is too many to bring to a photo shoot, but also how many is too many to own and when you should definitely start getting rid of them.

One of the causes of Gear Acquisition Syndrome (or G.A.S.) is that we have a huge choice of gear to buy and own. This leads to a phenomenon Michael calls “sandbagging.” It happens when photographers start to over-prepare and bring too much gear to the shoot, so they become less efficient and productive. To avoid sandbagging, you need to find a balance between the amount of gear and maximizing productivity. But how do you do it?

The truth is: the more lenses you own, you are more likely to use one (or more) of them you rarely or even never. Michael’s general recommendation is that five lenses are enough for one camera body. Anything over it decreases the probability that you’ll use them all equally. But of course, there are exceptions, nothing is black or white.

For example, cinematographers may have a bunch of primes on set, but their assistant is usually the one who manages those lenses and changes them, so the productivity isn’t hindered. Sports photographers often need a second shooter/assistant to help them cover the event with different focal lengths. But generally speaking, most of us have at least one lens that we almost never use. Even I do, and I only own four of them.

Michael also notes that, as photographers specialize, they tend to use some specific lenses more often than the others. For example, astrophotographers usually opt for wide-angle primes, portrait photographers typically like 85mm lenses, and wedding photographers often use 24-70mm and 70-200mm lenses. These are some common scenarios, but of course, there are always exceptions.

So, if you own many lenses, when should you start selling them? Ask yourself this: is there a lens in your arsenal that you haven’t used for a year and you have no plan on using it soon? If so, it’s a good candidate to be sold. If you haven’t used it for two years, definitely sell it and don’t get emotional about it! Take the money and invest it in gear you know you’ll use.

Michael also discusses how many lenses you should bring on a shoot. Some photographers tend to over-prepare and bring even the lenses they don’t use even once during the shoot. Nothing is set in stone here, but Michael’s rule of thumb is: you should bring one lens for a shoot lasting 45 minutes or less. For such a short period of time, you don’t have time to change lenses. If the shoot is gonna last between two and for hours, bring a second lens, too. In rare cases when he has two bodies, Michael brings three or four lenses, and he recommends that you hire an assistant if you need more than four lenses at the shoot.

So, generally speaking, it’s not set in stone how many lenses is too many. For me, as few as four lenses is too many because I use the 35mm f/1.8 once in a blue moon. For some of you, owning four lenses is only the beginning. The point is to think of the lenses you haven’t used for a year or more, and if you have those, it’s probably best to put them up for sale. After all, if sometime in the future you actually need them, you can always rent them instead of cluttering your gear shelves with something you will only use once or twice.

So, do you think you have too many lenses? How do you decide when it’s time to sell them?

[How Many Lenses is Too Many? | Michael The Maven]

Thieves may be selling your photos on Shutterstock