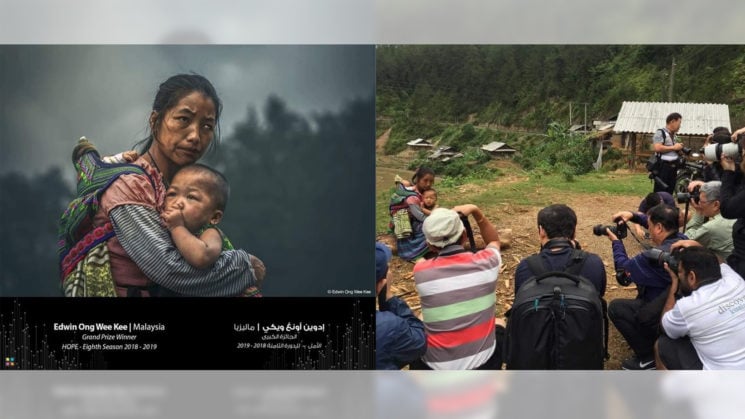 Prestigious competition the Hamdan International Photography Award (HIPA) recently announced its 2019 winners. Among them was Malaysian photographer Edwin Ong Wee Kee, whose photo of a Vietnamese mother carrying two children won the Grand Prize of $120,000. However, a behind-the-scenes shot of this moving image has been going around. And it shows that, apparently, the winning photo of the HIPA contest was staged.

The topic of this year’s HIPA contest was Hope. According to the description, the image “documented an intense humanitarian moment.” The subject of the photo is “a Vietnamese mother whose speech disorder did not prevent her from feeling hopeful and evoking a sense of strength for her children.”

However, the behind-the-scenes shot shows a bunch of photographers around the same subject, most likely taking nearly-identical photos. This photo has been spotted on the Facebook page of Ab Rashid, who is a photographer and the founder of Street Photo BD Magazine. Etienne Bossot of Pics of Asia has also shared the photo, along with an article about the case of staging photos like this.

The claim that the winning photo was staged, along with the BTS shot, have caused a strong reaction in the community. However, Ong Wee Kee claims that the photo was taken spontaneously. He told The Star that he and some other photographers went to the rice field, where the mother passed by carrying her children. “We then asked her whether we could take her photo of which she willingly sat down and allowed us to take her photo,” the photographer claims. He adds that none of the photographers asked her to stand up or sit down, and that she was still there and didn’t move until they left.

As far as I know, it’s not rare anymore that travel photographers stage models like this and market their photos as being spontaneous. And it’s certainly not cool. There have also been even bigger cases of faking, such as that Nikon photo contest from 2016. Or the BBC faking some scenes in its Human Planet documentary.

However, in the photographer’s defense, the topic of the contest isn’t photojournalism. Therefore, there’s no rule that the photo can’t be staged. After all, even the famous Migrant Mother was allegedly staged, so maybe this whole thing has been blown out of proportion.

What do you think? Does a staged photo deserve to win this sort of contest?

[via Light Stalking, Pics of Asia]

Was this iconic war photo staged?