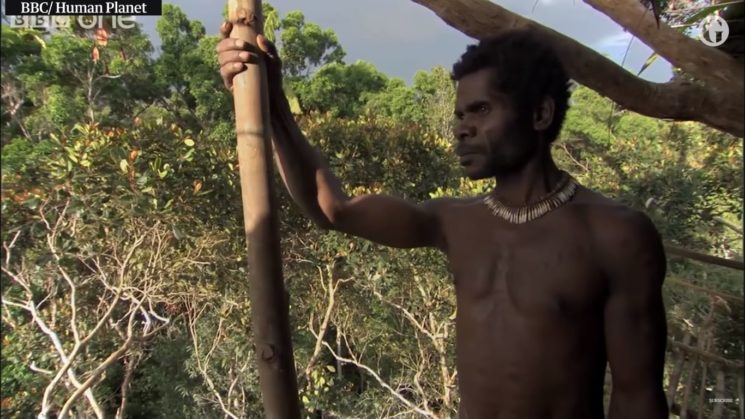 In a recent statement, the BBC admitted that one of their documentary series isn’t entirely documentary after all. Some of the scenes from their 2011 series Human Planet were admittedly staged by the creators.

In an episode about the Korowai people of Papua New Guinea, the tribe members were filmed while moving into a treehouse. However, while shooting a new documentary series, the members of the tribe admitted that “they built the treehouses for the benefit of overseas programme makers.”

The truth was reportedly revealed just recently, during the filming of My Year With The Tribe, a new documentary series for BBC2. As The Guardian reports, the BBC said in a statement that they “have been alerted to a breach of editorial standards” in the aforementioned episode of Human Planet. They reportedly reviewed the sequence in Human Planet and found that “the portrayal of the tribe moving into the treehouse as a real home is not accurate.”

According to The Guardian, this isn’t the first time that the scenes in the BBC’s documentary were faked. In 2015, the BBC admitted that they used a semi-domesticated wolf instead of filming a wild one. In an episode about Venezuela jungle from 2011, they had admittedly shot a tarantula spider in a studio.

The BBC is known for their groundbreaking and high-end documentaries. However, after scandals like this, one can’t help but wonder how much of it is real. The BBC told in the statement that they have “strengthened [their] mandatory training for all staff in editorial guidelines, standards and values” since Human Planet was first broadcasted. But, it seems that the makers still don’t respect these guidelines, standards, and values at all times.

[via Gizmodo, The Guardian]