I think it is a good question. On one hand, photographers, move, change lenses, operate strobes, look for different POV. On the other hand, editors really pump up some brain muscle which is known to burn more calories than sitting idle. I thought it was kinda like that research about bus drivers vs. conductors by Jeremy Morris. That research concluded that bus drivers are more prone to heart attacks thatn conductors since they move less during the working hours. (of course, if I wanted to stay true to that research this post would have been titled Who Is More Prone To Get A Heart Attack? – but… No drama today) 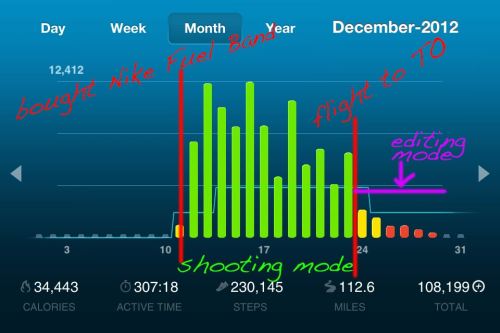 Luckily Benjamin Von Wong shared an interesting chart. The chart compares the output of Ben’s Nike Fuel Band over 19 days of activity. If you are not familiar with Nike Fuel, it is a bracelet that tracks the amount of calories you burn every day. (Yea, yea, I know N=1 is hardly a valid testing group, but for the sake of argument, go with me on that one).

On the first 13 days, Ben was shooting various projects back to back. Managing teams, moving on location, setting up and tearing down and actually taking pictures. This is where you see the high green lines.

On the next 6 days after Ben came back from the shoot and was sitting at a computer, editing pictures, doing mail work etc. Those are low yellow and red lines on the right.

Here is my take of the data, If you are editing pictures, you need to get another form of exercise.

Why Photographers Use Medium Format Cameras

These are the nine worst habits for landscape photographers

Photographers in isolation turn to computer games for shooting alternatives