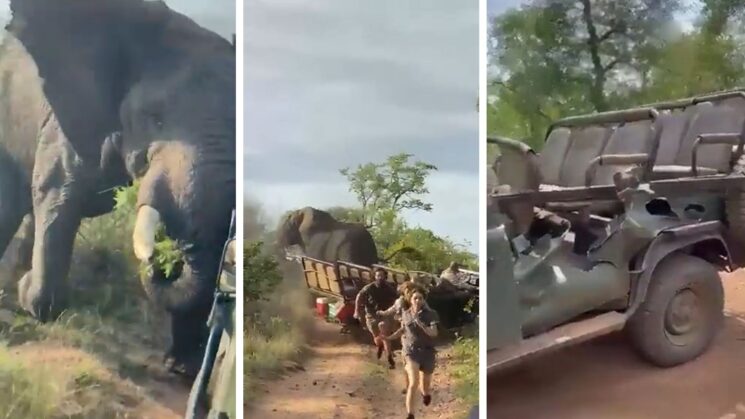 A group on a safari expedition recently had a close encounter with a giant bull elephant. The group was in an African wildlife reserve near a herd of elephants, when one of them charged at their truck, nearly flipping it over. This group and the others who were behind them caught the incident on camera and it’s truly terrifying to watch.

The incident took place at the Selati Game Reserve in South Africa on Sunday 28 November. Instructors and trainees from EcoTraining were in the safari vehicles when they encountered a herd of bull elephants blocking the road. Apparently, they were too close, as one of the males charged at the jeep. He mock-charged first, but then made contact with the vehicle, nearly flipping it over. One of the trainees filmed the encounter and of course, it ended up on social media.

Too much intrusion will take your life in Wilderness. However, wild animals keeps on forgiving us since long.#responsible_tourism specially wildlife tourism should be educational rather recreational.
हांथी के इतना घुसा नही जाता ? watch second video too pic.twitter.com/AOKGZ2BAjB

There is one more video filmed by someone in the vehicle behind. It shows the group jumping out of the attacked jeep and rushing towards another one.

In other news:It looks like uGatsheni was having none of it!?? pic.twitter.com/bETQdbz1Az

And in this video, you can see the aftermath of the contact. It looks pretty bad!

After the video ended up across social media, EcoTraining confirmed the incident and issued a press release:

“Sunday 28 November 2021, an elephant bull in musth damaged an EcoTraining vehicle on the Selati Game Reserve.

On a routine activity, the EcoTraining instructors and trainees came across a breeding herd of elephants. The vehicle stopped to observe the elephants and give them a chance to settle down. An elephant bull, who was with the breeding herd, mock charged the vehicle. The elephant bull mock charged again, when they moved forward slowly, and then made contact with the game drive vehicle and displaced it off the road. Once the vehicle had come to a standstill, the trainees were moved to the second vehicle that was parked in close proximity. Both EcoTraining instructors that accompanied the trainees have more than 25 years of experience in the field.

The General Manager of Selati Game Reserve, Mr. Bryan Havemann, was contacted shortly after the incident and went to the scene to assess the situation. Havemann said, “although the vehicle was damaged, thankfully none of the people on the vehicle were injured.”

EcoTraining said that all the people involved in the incident have received professional counseling after the incident.

It’s fortunate that none of the people were injured (or worse) in the incident. But maybe next time don’t get so close to animals during mating season? Just a suggestion.