This story exploded over the photography blogosphere and I am not really sure if this is a sad or a funny story anymore. 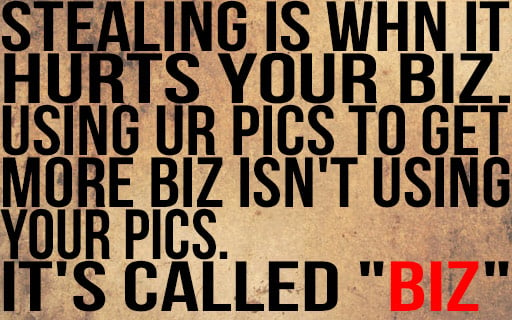 Apparently, photographer jwarstyle tried to get an easy pass into the wedding photography industry. He did so by picking up a few awesome wedding photos from Terralogical, Daniel Kudish and a few winners of Fearless Awards and displaying them as his own in a gallery that he took down.

But only after being called out by (the terrific) stop stealing photos tumblr the real fun  began. And by fun I mean god’s wrath unleashed in Jay’s twitter feed.

Apparently Jay (who is writing on the jwarstyle) thinks there is no harm in using other people photos. His most entertaining response tweet is:

Which could have summed it up, but going to the company blog, he has a post titled Bad advertisment is also good advertisement (screencap here) which shows that Jay thinks that he made quite a sweet deal:

The blog opens up with the following statement: “so before the comments role in I wanted to give the basic run down, in short and simple I effed and damn the speed bad news travel fast online, I totally underestimated the power of twitter, Lets get straight to the great news- 1300 page views woot woot!!!! so far so good high five everyone!!!!“

He also explains the motives behind it: “I wanted to get is gigs/jobs/work….nothing personal, if there’s a shortcut, i’ll take it“

And his plan out: “Reputation or no reputation, the “you’ll never work in this town again” speech is played out. Nothing a $12 domain change can’t fix.”

Over the last few months we have seen several photographers borrow content from others, be it pictures or words, and I think that as a community we can definitely do better.