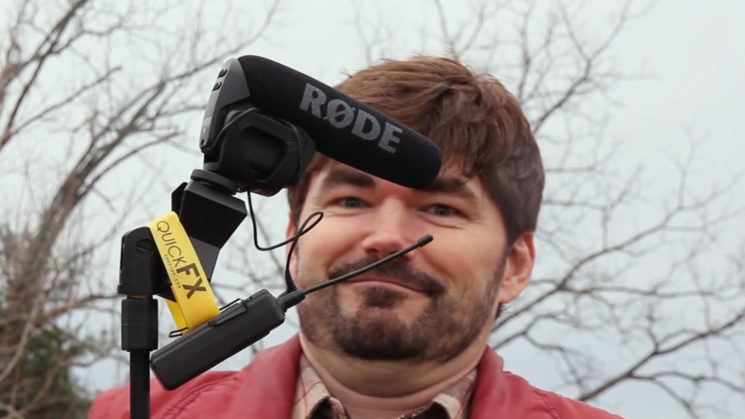 Boomed shotgun mics are my preferred method of recording audio. Lav mics are great, but for interviews and talky pieces to camera, they really don’t have that richness of a shotgun mic. Rode’s VideoMic and VideoMic Pro are two extremely popular microphones that sit in a DSLR hotshoe, but it is possible to get them off-camera.

In this video from Indy Mogul, shows a simple way to get the mic off the camera, and boomed wirelessly using the Saramonic UwMic9 (review). But, it should work with almost any wireless microphone set, including Rode’s own FilmMaker Kit. And you don’t have to use just those two microphones mentioned above, either. It’ll work with the VideoMicro, and just about any other mic that doesn’t require phantom power.

There’s a noticeable sound difference between the two, but why would you want to get it off the camera? Why not just use the lav?

Well, let’s tackle them individually. First, why not the lav? As I said, lavs are great, but they have a specific sound that’s very different to a boomed shotgun mic. They give good clear sound, and depending on how you record it, there’s a lot you can do with them in post to add some of that richness and depth into the recording.

But, they are not without their issues. If your subject has a tendency to fidget or play with their hair of clothes, it can create a lot of unwanted noise and rustling. Using a mic that isn’t physically attached to your subject eliminates this issue.

Ok, so you get a VideoMic Pro, or similar microphone to get that sound off the subject’s body. You stick it on your hotshoe, and you’re starting to get some decent audio – or at least better than the built in mics. But here the problem is that you’re limited to where you can move relative to your subject. 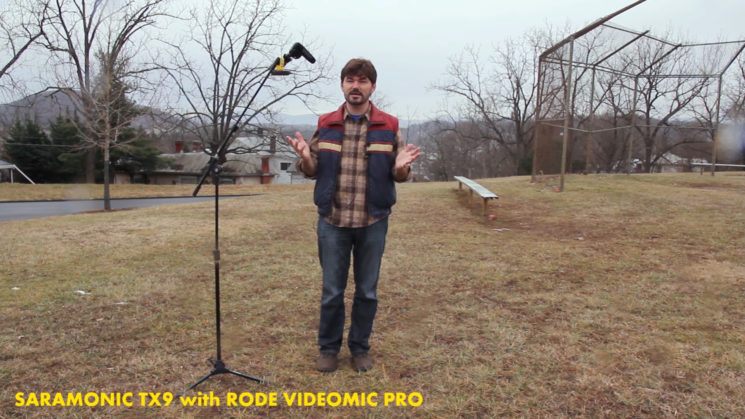 If you get closeer, you have to knock the record level down. If you move further away, you have to bump it up. And in indoor environments, depending on how far you are from your subject and how much you have to bump the levels, it can introduce a lot of echo.

As it is, this solution should work with any microphone that can plug straight into your camera. If you’re using something like the Rode VideoMic Me to go into a phone, you’ll probably need an adapter. But, it’ll still work.

You can even add wireless capability to higher end microphones using the same technique. While you can’t really use mics that rely on having phantom power, some utilise other power sources. Like the Rode NTG-2, which can power from a internal AA battery. This would then be able to plug straight into your camera or a lav mic transmitter.

If you absolutely have to use a mic that requires 48v phantom power, then there are still other options. Such as Rode’s NewsShooter kit. But the price does start to climb a little. The Saramonic UwMic9 is relatively inexpensive if you go for the single transmitter kit. But, again, no phantom power.

So, if you’ve wanted to get your mic off the camera to bump up the audio quality, here’s one way. You could always just get a really long 3.5mm stereo extension cable. But then you have wires trailing all over the place, and you risk introducing a lot of noise and hiss to the recording.

« Are photography trade shows, conferences and expos really worth going to?
From bugs to poison: the weird history of fake blood »