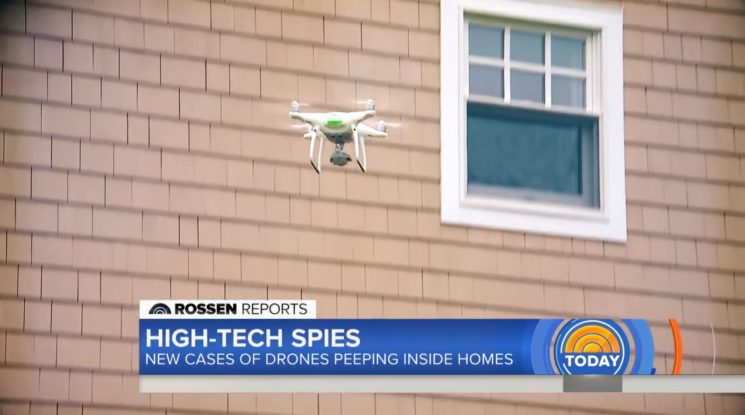 We’ve all experienced how sensationalism can sometimes mire legitimate news stories, and we have plenty of examples out there. Just yesterday, there was a news segment on Today that showed just how easy it is for people to spy on you in your own house using “peeping drones.” Although the reporter offers some legitimate points, should we really be that worried about our privacy when it comes to drones?

On Thursday, May 9th, the American morning show Today dedicated a four-minute segment to “peeping drones.” Correspondent Jeff Rossen reported that some people are “actually using [drones] to go into neighborhoods and spy on people’s homes even going right up into the windows and looking at your most private moments anywhere you are in your house, and it’s happening nationwide.”

Rossen then went on to show real victims of these drones around the country and warned people to be cautious. He even went inside a house to demonstrate how hard it is to hear or see a drone even when it’s right outside your window. Considering how loud and visible they are, it’s quite surprising how it’s difficult to notice them when you’re inside.

In his attempt to raise public awareness regarding these “peeping drones,” however, the Today correspondent might have also affected law-abiding drone enthusiasts negatively. It’s no secret that the public has been concerned about privacy issues ever since drones were made available to regular consumers. As Rossen pointed out, there have been plenty of cases that understandably make some people even more apprehensive about these flying cameras. Nevertheless, these are still isolated incidents. Despite what the report made it look like, the majority of people who fly drones don’t do it for nefarious reasons.

It’s just sad that Rossen’s report has given your neighbors yet another reason to be suspicious of you whenever you fly your drone.  And if you happen that certain neighbor wary of drones flying around, then you better read this article detailing reasons why drones AREN’T SPYING ON YOU.

Do you have any bad/sad experiences with the public while flying a drone? Let us know in the comments below!

« It’s impossible to be unique, but here’s how to find your own style
iPhone’s digital viewfinder might let you see separate views from its dual cameras in the future. »