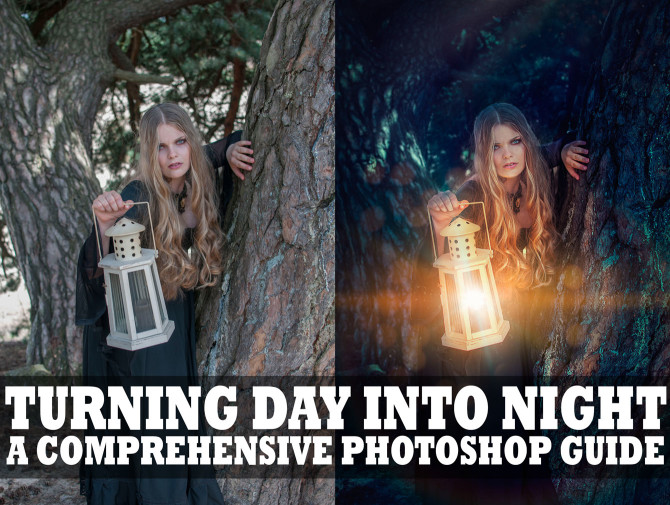 Last week my good friend and awesome photographer Yvette Leur asked if I could edit one of her images she shot.  It was a lovely shot of a woman holding a lantern. The intention was that it was a nightly scene, with a lit lantern, the problem was that it was shot during a sunny day, in the shade, with no light in the lantern…hmmm

I accepted the challenge, and was given free reign of the edit. 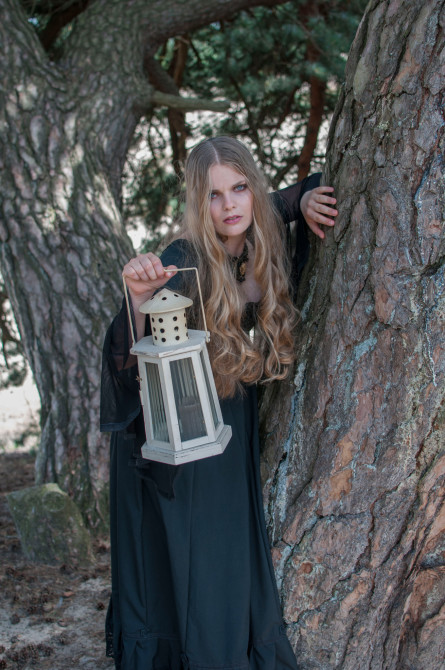 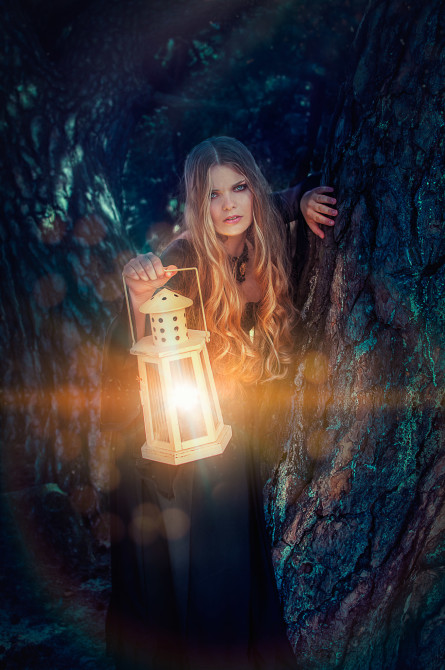 What I’ll first do before attempting any color grading is to retouch the photograph. I got rid of the bright sunlit spots in the background and anything that might distract from the main subject in the image. After that I went on to retouch the image, further, remove blemishes, stray hairs, and such, using the clone stamp tool and the Healing Brush Tool.

Once that is set I went on to fix a light for the lantern. I have a vast library of textures and light sources. Some awesome flares and light rays I got from RAWExchange.de and others I have found on the net here and there. 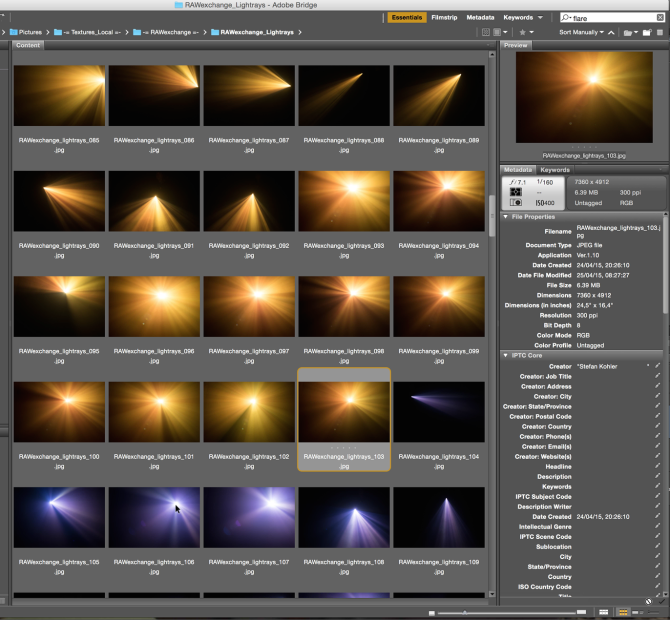 Different flares and rays to pick from (this rawex pacakge)

To make sure I get the right flare effect, I also wanted to have the image toned in a correct color, so using a curve adjustment layer I pulled the whole image to a blueish night scene, and using the layer mask I brought the subject back in. 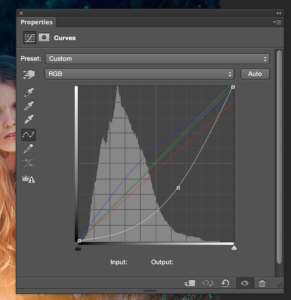 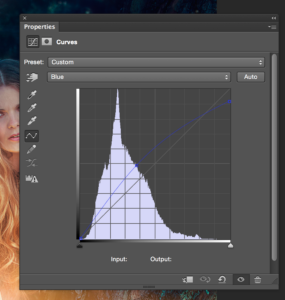 Pulling up on the blue channel curve will add more blue color to an image.

To make the blue tone or any tone for that matter I apply a simple train of thought. The image is to light, so I make it darker by pulling down on the RGB curve. Then I want it all to turn blue, so I pull the Blue curve up, and then adjust until satisfied. Using layer masks and opacities I just blend it into the image.

Then added another curve adjustment to add some orange highlights where necessary.

For glows and lens flares I hardly use just one bright spot. Every flare is different and behaves different so I try to make them unique every time. I play around with different flares and opacities. An easy way to add a flare texture to an image is to set the flare’s layer blending mode to ‘screen‘ right on top of the layer stack.

*A quick warning though, sometimes a flare will go beyond the photo border, leaving you with a straight line in the image. Fix it by using a layer mask and blending it in.

Tip: To change a flares color, simply add an HSB adjustment layer and clip it to the flare, then adjust the hue, to have the flare change color.

I keep going back and forth, adding adjustment layers and flares/rays to suit my needs, building the image up a layer at a time.

Some dodging and burning for highlighting certain parts even more.

I recently came across 3DLUT creator, which is a standalone app that allows you to confront massive color grading tasks for video or for still images. Its a versatile and powerful tool. You can build a look and color grade and save it as a LUT file (LookUp Table) which is a universal standard that can be imported into most video and photo editing software. I once wrote a little tutorial about 3D Luts in Photoshop, which you can find here. 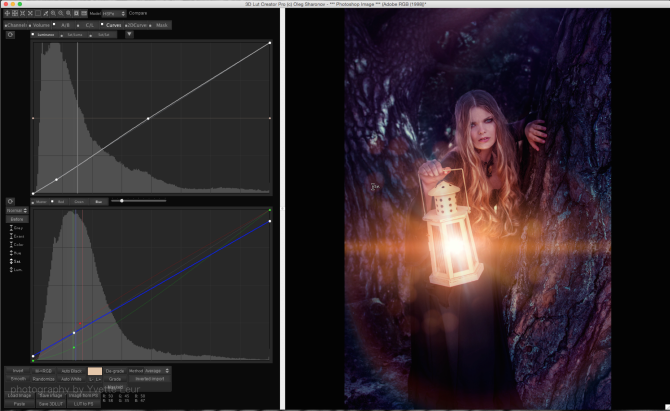 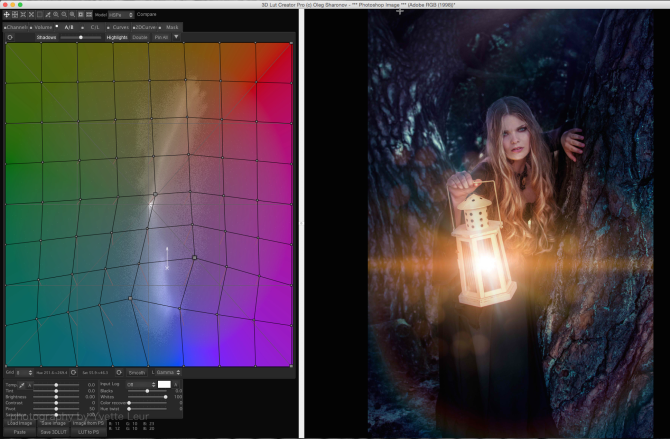 I’m not too versed in the program yet, but its fun to play with and see what happens.

It allows me to grab the current photoshop image, apply my corrections to it, then send it back to PS and my changes will be applied as a Color Lookup Adjustment Layer, ready to use (and re-use) on other images.

Back in Photoshop… Once I have my “final” look, I run it through Smart Liquify, which is the most amazing tool from Conny Wallstrom’s Retouching Toolkit. It basically does a Merge Visible of your layer stack, but transforms it into a smart object, so any adjustments you do on the layer stack below, will be updated at the press of a button to the smart-flattened-object-layer.

By using the Smart Liquify action, I can use plugins like NIKtools to adjust my image even further, and keep everything non-destructive.

And here’s the video I made of the entire process. Total image completion was one hour, but I boiled it down to an eight minute video for your viewing pleasure.

The Comprehensive And Contemplative Guide On Creating Magical Smoke Composites