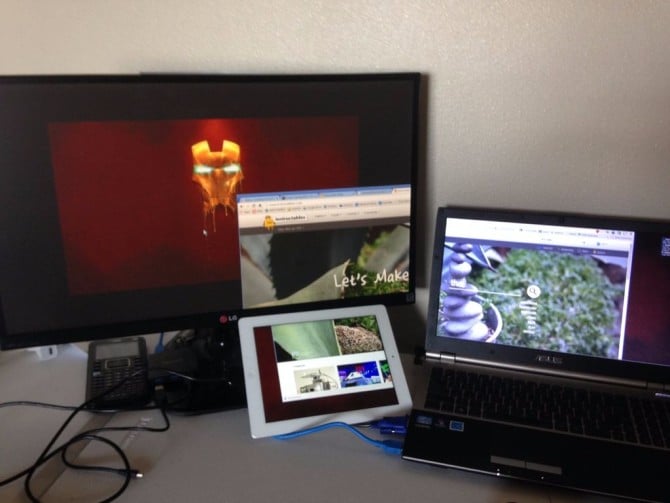 One problem that we photographers (and other creative pros) run into a lot is the need for additional screen real estate.  For those on the go and working from laptops, it’s really not convenient to carry around an extra LCD monitor in your bag (obviously).  But, if you have an iPad or Android tablet, you may have just found your answer neigh at hand.

Instructables user Ironman 54 recently detailed the process of easily turning his iPad into an external monitor for his computer.

As is evidenced by this Lifehacker post several years ago (which inspired our digital superhero above), there have been a variety of apps available for this purpose for quite a while.  The most difficult part is simply a matter of determining which app will meet your needs and work with your platform.  As Ironman 54 (can we just call him “Willie?”) states:

Each of these has their pros and cons. Some work exclusively over WiFi or USB while others work for both. Some are compatible between ios devices and android and others aren’t. Some work for Windows but not Mac and vice versa.

iDisplay (Mac/Win, iOS/Android) – iDisplay is a great app in that it not only allows you to add a secondary touchscreen monitor to your computer but also gives you the option of “cloning” your screen to multiple mobile devices at once over a shared WiFi connection.  The desktop app is free to download and use while the app for your mobile device is available for $9.99 (iPad), $0.99 (iPad Mini), and $4.76 (Android).

TwomonAir (Mac/Win, iOS/Android) – TwomonAir gives users a variety of options, from using your tablet as a secondary monitor to giving you remote access and control over your system to using it as a keyboard extension or joystick controller.  This could be great for not only expanding your workspace but would be invaluable for presentations.  As with iDisplay, the desktop app for Windows and Mac is free while the mobile app will set you back $7.99 for the iOS app and $8.83 for the Android app.

Duet (Mac/Win, iOS) – Duet is a sleek application developed by “ex-apple engineers” (according to the introduction to their website, which leads me to believe there may have been bad blood…but, who knows).  It is compatible with both Mac and Windows desktop platforms but, unfortunately, is only available for iOS mobile devices.  The cost of $15.99 will allow you to download the mobile app on any number of devices sharing the same iTunes account as well as an unlimited number of desktops at no additional charge.

How it could come in handy

Personally, I could see this functionality being a great benefit both in an office setting as well on the road.  Having that extra screen space while sitting in your local Starbucks (for all you yuppie hipsters) can make editing and working on the fly much more convenient.  Additionally, a setup like iDisplay could be great for collaborative teams, especially when shooting on location as each member of the squad and get a real-time glimpse of what’s going on without having to huddle around a single monitor.

So, if you’re in a pinch or need more virtual real estate on the go, stop over and check out this tutorial for more info!

How to thoroughly disinfect your camera and workspace