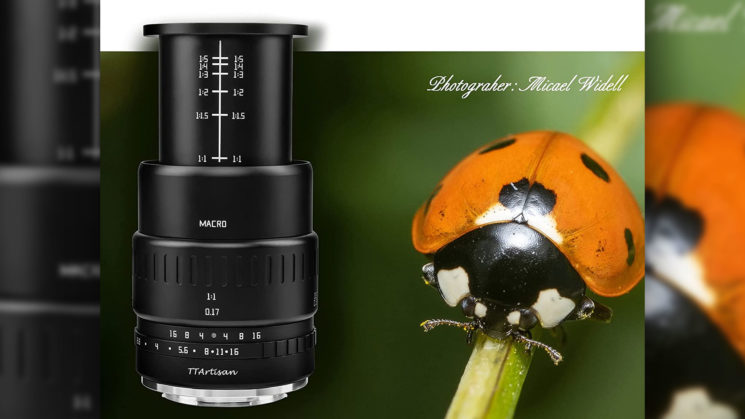 TTArtisan has announced its manual focus 40mm f/2.8 Macro lens for APS-C mirrorless and Micro Four Thirds. Despite being an APS-C lens and only manual focus, there’s no EF-M for this one (not yet anyway, although I hear EF-M might be on the way), just Fuji X and APS-C Sony E mounts. The lens offers a minimum focus distance of 17mm with 1:1 magnification.

Although the lens was only officially announced today, it’s been in the hands of reviewers for a little while. Christopher Frost got his hands on one and took it for a spin on his Sony A5100. It’s a pretty ugly looking lens, although the images don’t look half bad, especially when you consider the lens costs less than $115.

As a fully manual lens with no kind of communication between itself and the camera at all, this means you might have to set up your camera (at least in the case of Micro Four Thirds) to tell it to shoot with no lens attached. The camera simply won’t know that it’s there. You’re controlling both the focus and the aperture manually via rings on the lens, and no information about the lens is stored in the EXIF data.

Looking at Christopher’s review above, the lens seems quite sharp, even wide open at f/2.8, although it’s rare you’ll want to use a macro lens at macro distances with such a wide aperture. At f/5.6-8, the results look very impressive, with good sharpness and little correction or chromatic aberration.

There are no frills at all on this lens. And for $113.99, you shouldn’t really expect any, although it does appear to be an all-metal construction. The only real disappointment sounds like the screw-on lens cap. I think you can safely add a couple of bucks to the cost to buy yourself a spare pinch style lens cap for this one.