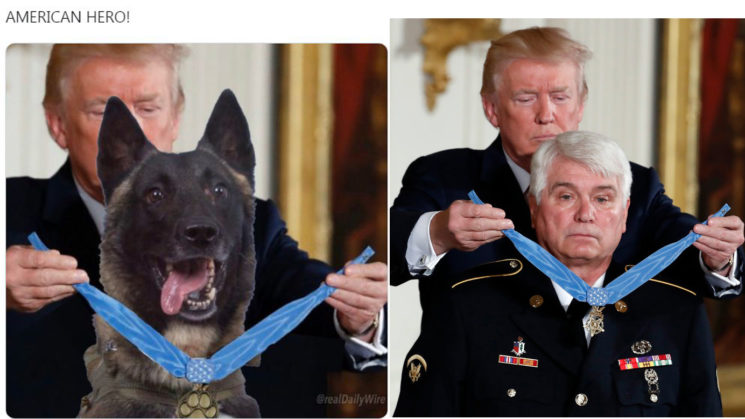 The USA President Donald Trump has recently tweeted a photo of himself awarding a Medal of Honor to a military dog. As if it’s not unusual enough to award this medal to an animal, the image is very obviously photoshopped. After someone found the original photo from 2017, Trump received a massive meme roast under his tweet, and some of these are utterly hilarious.

The Guardian writes that the dog in the photo was involved in a raid that killed the Islamic State leader Abu Bakr al-Baghdadi. The image was created by the Daily Wire, a conservative website, as you can see from the credits. And as I mentioned, it’s very obviously photoshopped.

The New York Times notes that this photo was made from an Associated Press photo of Trump awarding the Medal of Honor James McCloughan in 2017. McCloughan is a retired army medic who was honored for saving the lives of ten people during the Vietnam War.

In another tweet, Trump thanked the Daily Wire for a “cute recreation.” He also declassified the dog’s name, referring to him as “Conan.”

I have to admit I have no idea why Trump would tweet a photo like this, and I won’t even get into that. I was even kinda annoyed. But then I saw memes that followed this ridiculous photomanipulation, and they cracked me up. So I’m sharing them below hoping to cause more laughter than an annoyance. And perhaps they will inspire you to contribute to this massive roast with a meme of your own.

“We named the dog Photoshop.” pic.twitter.com/EwbpWSU9yx