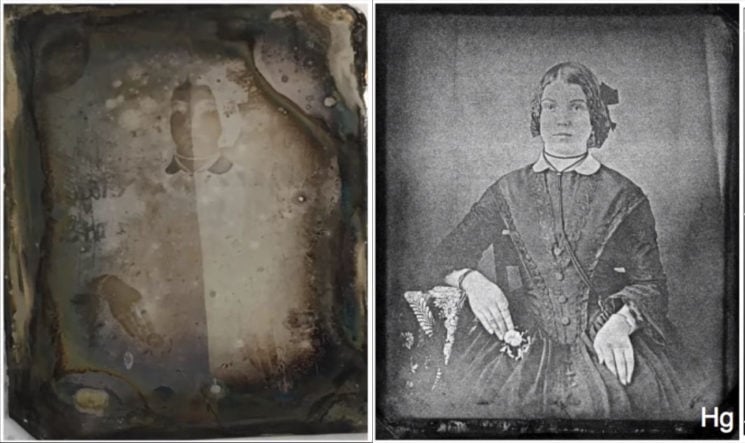 Daguerreotypes break down with time and can eventually become ruined and unrecognizable. But researchers at Western University in Canada have created a new technique that recovers even the most damaged daguerreotypes. It reveals what lies under the severe degradation and shows the images in all their original detail.

The daguerreotype was invented in 1839, using a highly polished silver-coated copper plate that was sensitive to light when exposed to an iodine vapor. The image would imprint on the plate and then developed as a photo using a heated mercury vapor. Over the years, daguerreotype images break down. The damage sometimes gets so severe that the images go beyond recognition.

Madalena Kozachuk, a PhD student in Western’s Department of Chemistry, studied the technique to recover the old beauty and detail in the damaged images. She is a lead author of the scientific paper which describes the research and the process of recovery. Tsun-Kong Sham, one of the co-authors of the paper, explains:

“Mercury is the major element that contributes to the imagery captured in these photographs. Even though the surface is tarnished, those image particles remain intact. By looking at the mercury, we can retrieve the image in great detail.”

The process of recovering the daguerreotypes is described on the Western University’s website:

“Kozachuk used rapid-scanning micro-X-ray fluorescence imaging to analyze the plates, which are about 7.5 cm wide, and identified where mercury was distributed on the plates. With an X-ray beam as small as 10×10 microns (a human scalp hair averages 75 microns across) and at an energy most sensitive to mercury absorption, the scan of each daguerreotype took about eight hours.”

As a result of the scanning, the researchers were able to see below the tarnish and damage and fully recover the images. When restored, the photo shows even “the eyes, the folds of the clothing, the detailed embroidered patterns of the table cloth,” as Kozachuk describes.

Although the process takes time, this technique could be useful for art curators. I believe it could reveal some historically significant daguerreotypes, and I hope we’ll get to see that in the years to come.