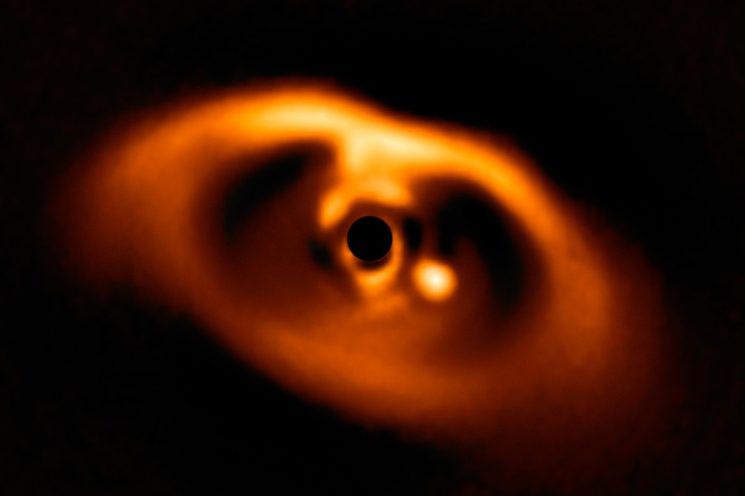 Photos of distant planets are fascinating, right? But how often do we get to see a photo of a planet as it’s just being formed? Scientists at the Max Planck Institute have recently captured a planet as it was forming around a young star. The photo is incredibly detailed and it’s the best photo of a planet’s birth taken so far.

The Max Planck Institute scientists were working with the European Southern Observatory’s very large telescope in Chile when they captured the star being formed. In the photo, you can see the object taking shape inside the large cloud of gas and dust surrounding new stars, known as a protoplanetary disk. It’s a planet being formed around a star.

The planet is a few times the mass of Jupiter, and the scientists learned that it’s 22 times further out from its star than the Earth is from the Sun. The planet is believed to be 5.4 million years old. Okay, it’s a lot, but it’s considered a newborn on a cosmological scale. The scientists named “the newborn” PDS 70 b.

Miriam Keppler of Max Planck Institute told The Verge that “for some time it was suspected that planets might be forming in this disk.” Thanks to this image, there is now the evidence that there is at least one, according to Keppler. The Verge writes that detecting planets around distant stars can be incredibly difficult because the starlight usually overpowers the much dimmer planet. To get this photo, the scientist used a coronagraph: it blocks out the light from the star so it allowed them to see and photograph the planet forming around the star.

Even though scientists have photographed the birth of planets before, Keppler says that the authenticity of those photos is often debated. However, she is confident that this is, so far, the best detection of a planet being born around a star.

I feel fascinated by photos like this, showing us the worlds far away from our home planet. But other than being spectacular, these photos can help us learn and understand the Universe and its secrets better.