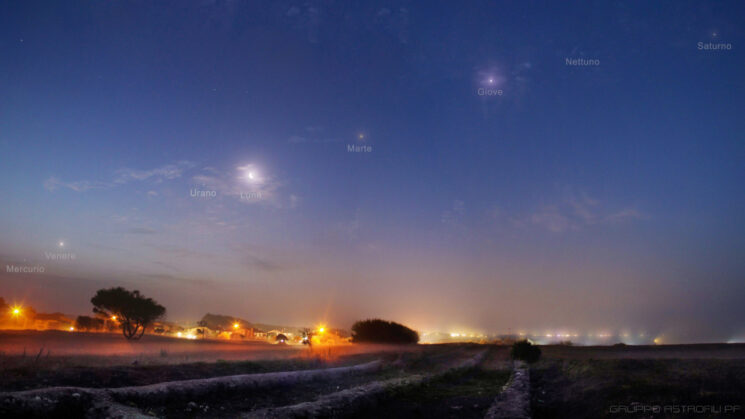 This summer, astrophotographers and astronomy enthusiasts are up for a real treat. If you point your camera up to the sky before the sunrise, you’ll find five planets of our solar system lined up. Add the moon to the equation, and there’s an opportunity for some stunning photos.

One of those photos was kindly shared today with DIYP. Photographers from Italian astronomical society Gruppo Astrofili Palidoro took it, and they have shared some details and the photo with us.

Folks behind this wonderful image are Antonio Canaveras, Chiara Tronci, Giovanni Esposito, Giuseppe Conzo, and Luciana Guariglia. They shot simultaneously with four cameras to capture the image of the night sky and create this cooperative astro-panorama. They took photos before the dawn on 24 June, when the phenomenon was the most visible and the moon was also in the frame. As for the location, the photo was taken near Marina di San Nicola, Italy.

“That foggy morning found innermost planet Mercury close to the horizon but just visible against the twilight, below and left of brilliant Venus,” the team explains. “Along with the waning crescent Moon, the other bright naked-eye planets, Mars, Jupiter, and Saturn lie near the ecliptic, arcing up and to the right across the wide field of view.”

The team notes that not all the planets were visible to the naked eye. They needed the binoculars to spot the much fainter planets Uranus and Neptune, though they also were along the ecliptic in the sky.  But with long exposure photography, all of them became visible and captured in this shot. 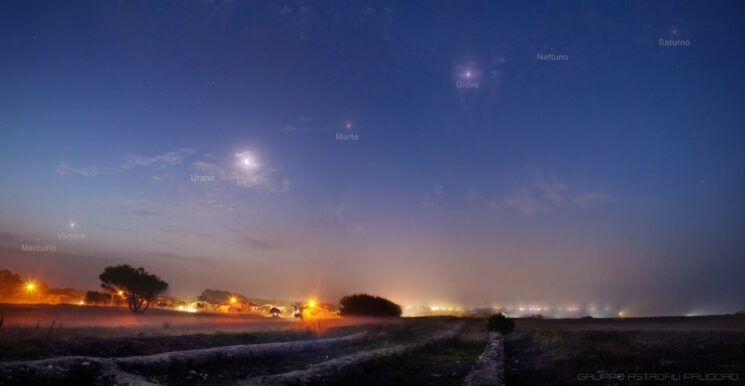 This gorgeous image ended up being the Astronomy Photo of the Day for 25 June 2022, and it’s no surprise. I hope I’ll get to take my photo of the alignment as well and hope it won’t end up like my attempts at shooting Neowise. :) And if you have witnessed and captured the planet alignment as well, feel free to share your photos in the comments.

Photographers, don’t miss five planets lined up in the sky in June and July