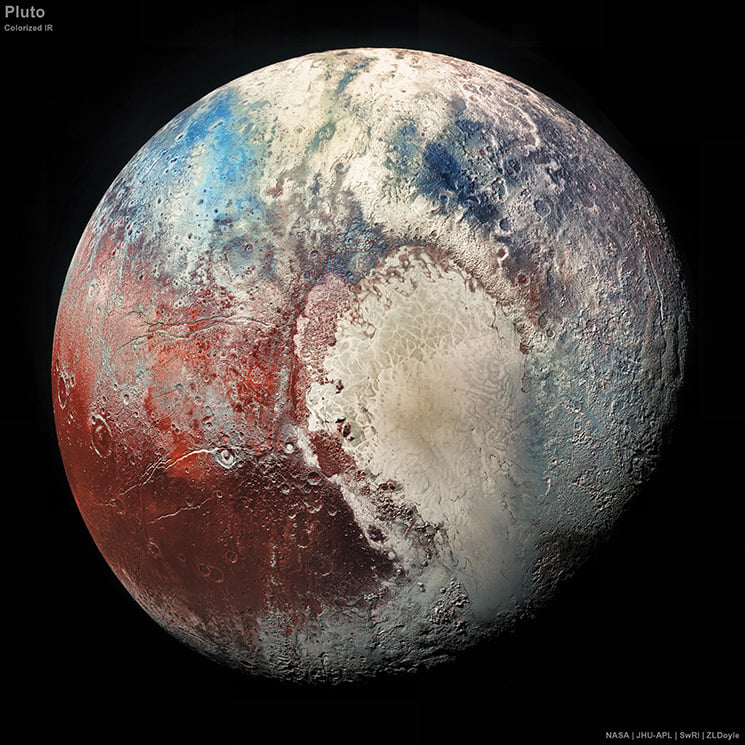 It was three years ago when NASA shared the first image of Pluto taken with a camera named Ralph. An enhanced image showed us rich and wonderful color variations, and now there’s an infrared image as well. It’s amazingly rich in details, and the colors are just gorgeous.

The image was originally captured on 14 July 2015 by the Ralph/Multispectral Visual Imaging Camera (MVIC). It combines blue, red and infrared images and the variety of colors shows different geological and climatological areas. The Planetary Society explains how the infrared colorized image was created:

“…the red luminance channel corresponds to the infrared data acquired by the Ralph/MVIC instrument as it flew past Pluto. The green and blue luminance channels have been removed. The color data from the original image was layered over the remaining luminance channel and further enhanced to bring out greater variation across the surface of Pluto. Because the luminance data was captured through an infrared filter, the areas appearing closest to white correspond with areas most reflective to infrared wavelengths.”

As you probably know, Pluto was downgraded to “dwarf planet” in August 2006, which sparked a lot of debate. Nevertheless, NASA says that it’s “small in size, but not in importance.” New Horizons spacecraft was launched in 2006 with a mission to examine this dwarf planet. And since the release of the images, we’ve been able to learn more about Pluto… But also to turn it into memes.

Check out the 4K resolution of the infrared photo here. You can also explore Pluto and other planets and dwarf planets on this link.