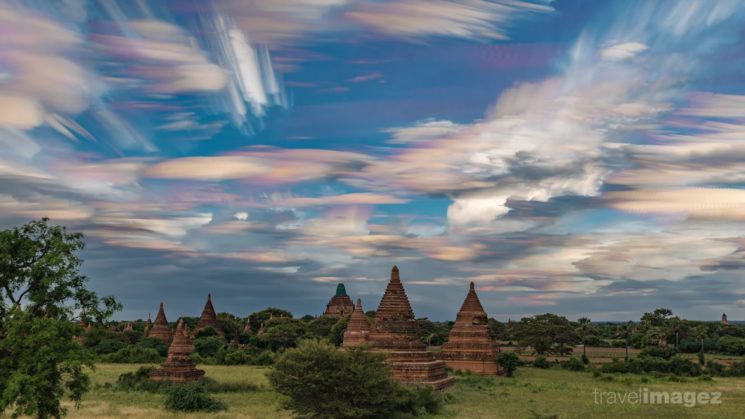 With can experiment and play with almost anything to create a piece of art. In his latest timelapse, Martien Janssen shows us that we can even play with time. He traveled to Myanmar to capture its beauty, and he brings you Timeblend, a timelapse that blends and bends time, draws with light, and shows you a totally different perspective on the world around us.

Timeblend is the fourth movie of Martien’s Bagan timelapse pentalogy. “By blending images from the timelapse sequence with each other, I aim to show the changes that occur over time blended into each frame,” Martien explains. “It captures time in a way we can’t perceive with our own eyes.”

Martien’s plan was simple: he was going to visit Bagan during Milky Way season, spend two weeks there, shoot his photos, leave Myanmar, edit his photos and movies elsewhere and then share them. But as it often happens, the plan didn’t really go as expected. If you ask me, the reality ended up being even better:

While shooting videos and photos for eleven weeks in Myanmar sounds like a dream come true, not everything ran smoothly. Martien had to face a bunch of challenges. Timeblend was shot in Bagan, a city with 2,200 temples. Unfortunately, most of them had the rooftop access closed, and some were under construction.

Martien wanted to shoot hot air balloons, but he found out that they only fly from October to march, so he had to return in October. Because of the Monsoon season, the sky was often cloudy, which means there was no chance of shooting starry skies and Milky Way. But on the other hand, there was no a single storm that would make the photos more dramatic. It was hot and humid, and there were also snakes to worry about. And these are only some of the challenges Martien ran into.

To complete the whole pentalogy, it took Martien whopping 150,000 photos, 2,000 hours of shooting, and 20 more months to create the videos. Timeblend has resulted in hypnotizing shots, similar to those we’ve can do with this “time stacking” technique.

« Canon’s 5D line will end with the Mark IV. There will be no Mark V, report says
Nikon finally joins everybody else – soon to let you use your DSLR or mirrorless as a webcam »