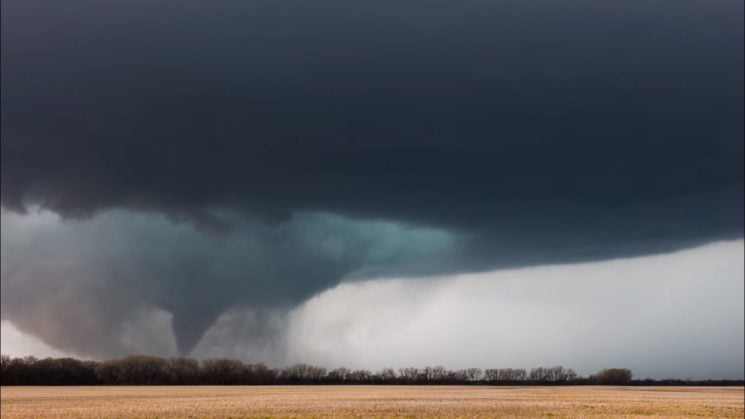 If you’re into storm chasing and fantastic timelapse videos, then you’ve probably heard of Mike Olbinski. He has recently published his latest video, and just like before: it’s mind-blowing. You can see a tornado forming right before your eyes, and Mike managed to capture its entire lifecycle that will leave you in awe.

Mike writes that the 2018 storm chasing season has been tough, with long days and not much reward. But then, on 1 May, he managed to film a tornado raging close to Tescott. He watched it from Culver City and managed to capture it from the very beginning. The final timelapse shows the formation of the tornado “from wall cloud, to cone, to wedge and then fading into rain,” as Mike writes. Although it caused material damage, no one was hurt or killed.

As for the technical details, Mike used two Canon 5DS R cameras with Canon 11-24mm and Canon 50mm f/1.2. The interval between the photos was one second, and he used After Effects, LR Time-lapse, Premiere Pro, and Lightroom to get the final timelapse video.

Mike calls this video “the best tornado footage he’s captured on timelapse” and adds that it’s the highlight of the spring so far. He says he was lucky to capture the tornado’s entire lifecycle, but I must add that he was also persistent enough to chase the storm and skillful enough to turn it into such awe-inspiring video.

Watch Seattle grow before your eyes in this three-year timelapse