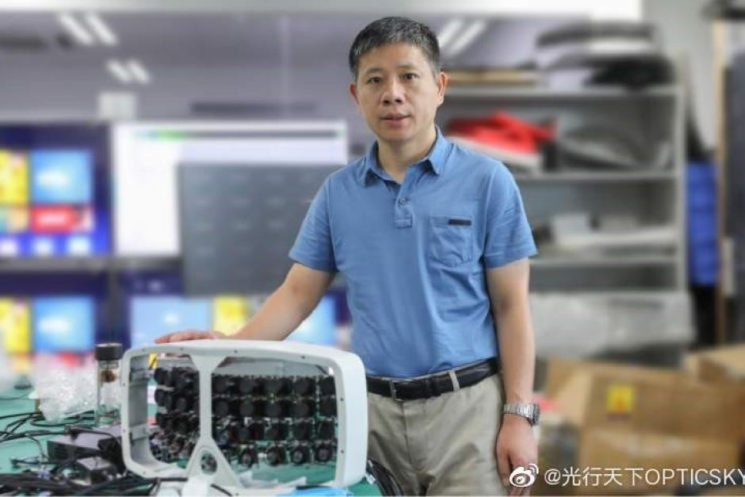 I remember when CCTV really became a big thing. For years, London had the most cameras of any city in the world. Now it appears that London has slipped behind, now sitting third behind Beijing and Chongqing in China. Although, these days, it’s not so much about how many cameras you have as it is about how many megapixels each of them has.

At the China International Industry Fair last week, scientists revealed a 500-megapixel cloud camera system, which they says is capable of capturing facial details of every individual in a crowd of tens of thousands of people.

The camera was designed by Fudan University and Changchun Institute of Optics, Fine Mechanics and Physics of the Chinese Academy of Sciences. They say that the camera’s resolution is “five times more detailed than the human eye”, although the maths of it all is never really that simple. But it does come equipped with AI, facial recognition, real-time monitoring and cloud computing technology to offload the heavy lifting.

The purpose for this camera is, obviously surveillance. To what end, I will not speculate, but ABC reports that it can detect and identify human faces and other objects, and instantly find specific individuals even somewhere like a huge crowded stadium.

Images and video can be shot with the camera, although it’s processed up in the cloud. If we put potential legal and privacy issues aside, shifting around all that data, getting it processed in the cloud, and then sent back to wherever it needs to be sent to is a mammoth challenge. 500-megapixel images aren’t exactly small. And if the video is at full 500-megapixel resolution, well, yeah, have fun with that one!

Naturally, the camera has been met with a mixed response, with some in favour of the defensive and security applications it can assist with, while others are obviously concerned with privacy.

Whichever way you look at it, though, it’s a pretty amazing technical achievement.

A Feather Made From Tens Of Thousands Of Nude Photos

« Adobe shows off new and smarter Content-Aware Fill, coming to Photoshop soon
How To perfectly balance a Black Magic 4k on a Zhiyun Crane 2 »