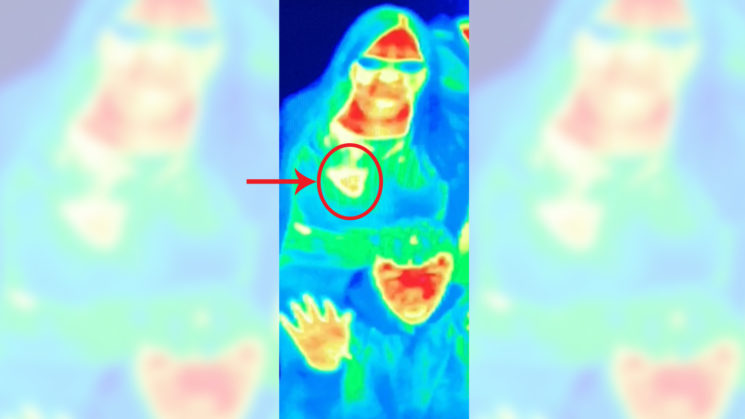 A family visit to a museum turned out to be a life-changing and possibly life-saving event for one woman, all thanks to a thermal camera. When she visited Camera Obscura and World of Illusions in Edinburg, the thermal camera detected that she had breast cancer while it was still in an early stage.

The Thermal Camera was installed in Camera Obscura and World of Illusions in 2009 and it lets visitors see their body “hot spots.” Bal Gill, 41, visited the museum with her family in May this year. When she took a photo during the fun visit, she noticed something unusual: a red heat patch on her left breast.

In a letter she sent to the museum, Bal explained:

“While making our way through the floors we got to the thermal imaging camera room. As all families do, we entered and started to wave our arms and look at the images created. While doing this I noticed a heat patch (red in colour) coming from my left breast. We thought it was odd and having looked at everyone else they didn’t have the same. I took a picture and we carried on and enjoyed the rest of the museum.”

A few days later, after returning home, Bal was going through the photos and saw the image from the museum. She did a little bit of Google search and saw a lot of articles about breast cancer and thermal imaging cameras. I guess this time googling about possible disease turned out to be a good call. It prompted her to make an appointment with her doctor, and it turned out that she indeed had breast cancer. Thankfully, it was in really early stages.

So far, Bal has had two surgeries and has one more to go to prevent cancer from spreading. “I just wanted to say thank you: without that camera, I would never have known,” she wrote in the letter to the museum. “I know it’s not the intention of the camera but for me, it really was a life-changing visit.”

Andrew Johnson, General Manager of Camera Obscura and World of Illusions said: “We did not realise that our Thermal Camera had the potential to detect life-changing symptoms in this way.” He notes that he and his team were really moved when Bal contacted them to share her story. “It’s amazing that Bal noticed the difference in the image and crucially acted on it promptly,” he said, adding that he and his team “wish her all the best with her recovery and hope to meet her and her family in the future.”

I can only join Andrew Johnson’s wishes and send my love and support to Bal, and to all the ladies out there fighting with breast cancer. I will remind you that October is the Breast Cancer Awareness Month, and this story is a reminder that the disease can be successfully treated if it’s discovered early.

However, keep in mind that thermal imaging is not a 100% reliable method for diagnosing breast cancer. Caroline Rubin of The Royal College of Radiologists told CNN that “thermography devices are not sensitive or specific enough to be a trusted method to detect breast cancer.” She added that, in Bal’s case, “the discovery was serendipitous.”

So, in the spirit of the Breast Cancer Awareness Month, I want to remind all ladies to perform regular self-checks and make sure to do routine mammography screening.