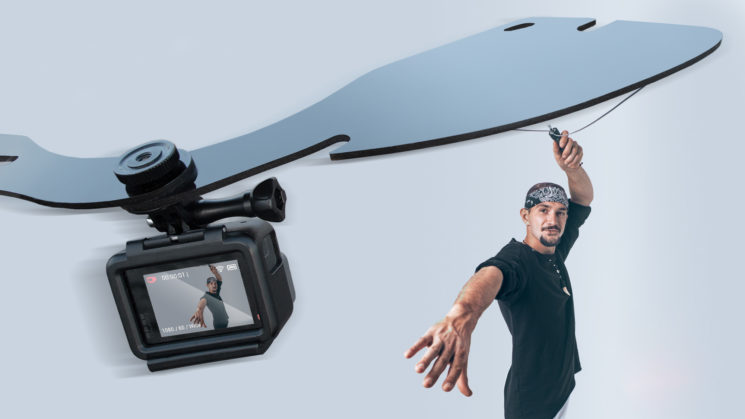 We’ve all had moments where we thought to ourselves “This would be the perfect opportunity for some bullet time!”. We’ve seen some DIY rigs in the past, as well as some not-so-portable solutions, but this looks like it could be just the ticket for throwing in your backpack alongside your GoPro.

Developed by filmmaker and inventor, Artem Gavr, The Wingo Pro looks to be an evolution of the coat hanger technique. A much more refined evolution, that offers a little more control over your shot. As in, you can actually angle the camera to eliminate the string and the hand holding it from appearing in the footage. It’s currently on Kickstarter, and it doesn’t look that bad at all.

Essentially the Wingo Pro is a wing that helps to guide the GoPro through the air and keep it level and stable while it rotates about your head. And it seems to do quite a good job of it, too, if the sample footage is anything to go by.

The Wingo Pro also folds up small allowing you to easily fit it in your backpack when not using it, and you can keep your camera attached while stowed. It has a standard GoPro attachment, and an adjustable counterweight to help you balance it for your camera and movement.

The Wingo Pro is a boomerang-like polycarbonate wing attached to a 2-metre cord, which is adjustable to the length you need with a handle on the other end. Longer cords spin slower than shorter cords with the same amount of effort. All you have to do is unfold it, set your camera position and swing away.

The trick to getting that bullet time effect is to shoot at the fastest frame rate your camera will allow, and then play it back at a more standard 24-30 frames per second. The camera whizzing through the air slows down, as does any movement in the scene.

The Wingo Pro will have a price of $75 when it goes retail. Right now you can get one via the Kickstarter campaign for a pledge of only $45. I think $75 is a bit much, personally, but for $45 I think it’s not a bad price if it’s something you’ll use regularly.

If you want to find out more and get your own, head on over to the Wingo Pro Kickstarter.