It began with living in the real world, a place that drives me to perpetual curiosity. Humans are a fascinating study, even for the layman like myself. These subservient minions of biology seem hardwired for utter chaos, and, like receiving an ambulance dispatch to a freshman sorority at 3 a.m. on a Saturday, not even God Himself can predict what you will see next.

Little-known fact: In a previous life (before a wife and kids), I was one of those people they would call out to pick up the drunken pieces after a college bash. But, it wasn’t all fun and games…there were also those times of trying everything in my power to revive a loved one who just died in my hands as their family screamed in anguish around me. But that all seems so long ago…

The cynical phrase, “Nothing is as it seems,” rings especially true. As humans, we naturally perceive what we want to perceive, and, no matter how much we sometimes like to convince ourselves we’re being truly objective or non-judgemental, we are constantly making subconscious judgement calls throughout our daily life.

The Age Project is an ongoing photographic collection which explores the sometimes paradoxical relationship between perception and reality along with the natural human propensity for being dissatisfied with whatever state in which we currently find ourselves. 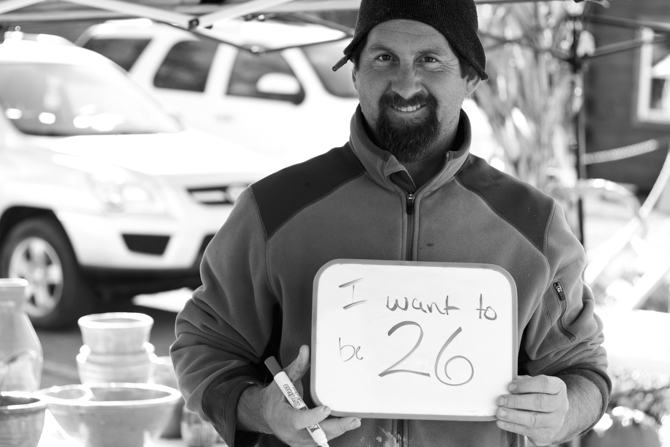 I can’t tell you when I conceived it (although, 9 chances of out 9.1, it was while driving on my morning or afternoon commute), but, I wanted to explore the human psyche in my own way, to kind of peel back a few layers and reveal some hidden truths skulking in the shadows. I wanted to prove that not all is as it seems.

Take, for instance, this gentleman, a weathered soul with a brilliant mind and a silver tongue. His expansive knowledge, mannerisms, and eloquence are reminiscent of a sophisticated member of Downton Abbey, while his appearance reminds you of a grandfather from the early twentieth century, weathered by age and beleaguered by time. 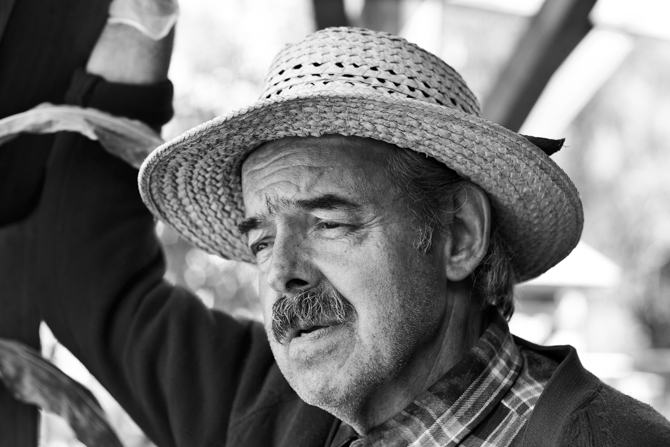 He dropped out of school early on to start working. He lives alone in a dilapidated house with no electricity or phone. He never learned to drive and has never touched a computer. To meet him, you can’t help but conclude that he is well into his golden years, the beautiful product of an era long ago. But, the reality? He is my father’s age, approximately early- to mid-50s when this photo was taken. Yet they seem as though they are from different worlds…

This is what I wanted to explore more deeply.

Additionally, humans live in a constant state of dissatisfaction. I’m there, you’re there…it’s a giant party…like a raging Cinco de Wish-things-were-different. It’s hard to be truly content. We’re like children. (Gosh!) This is especially true with age. Children wish to be teenagers; teenagers wish to be adults; adults wish to be older and more successful adults; older adults wish to be younger adults; and, in general, most people would love a second shot at life (myself not included…no way in hell I’m walking through all of that again).

And, people lie. People lie about everything. We are naturally dishonest creatures. From what we say to what we do to how we present ourselves in public, it seems like we are constantly communicating anything but the truth, whether actively or in a passive manner. This is no less true when it comes to age — children round up to their next birthday to feel more important; teenagers break out fake IDs so they can get wasted and call it fun; women feel insecure by females around them and sense a pressure to convince the world they are still full of youthful beauty. We dress differently; we talk in such a way as to project an image of the demographic we wish we were a part of.

All of this combined is what led me to creating this ongoing project. As I stated from the beginning, “There is no plan, there are no pretenses. There is no airbrushing or retouching. There is no Photoshop. It is unscripted, it is subjective. It is real.” I wanted the project to find its own identity within itself and have the freedom to fluidly change as needed. 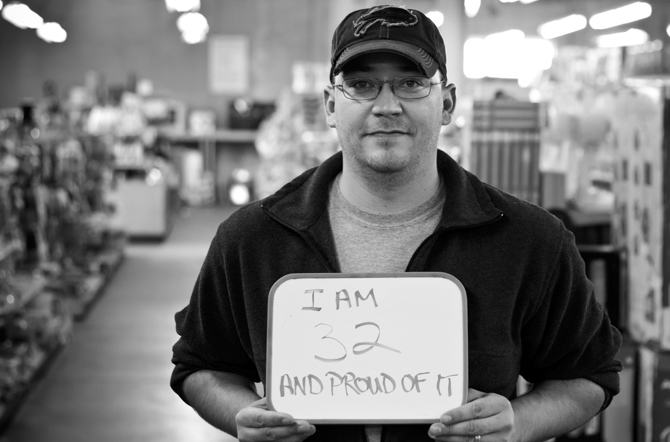 The process is very simple: I approach random strangers and ask for a moment of their time, explaining the project. They write something on a small dry erase board, and I photograph them holding it. I thank them for their time, and move on. …so easy, in fact, a Jane Goodall playmate could do it.

I give the subject the freedom to write whatever they want relating to their age. They can tell me how old they truly are; they can lie about their age; they can divulge the number of that magical age to which they wish they could transport..it doesn’t matter. Deciphering the truth is not the goal of this project, it is, rather, to explore perception — their perception of themselves, their perception of time and age, the perception of the viewer and their own interpretation of what is scrawled across that board. 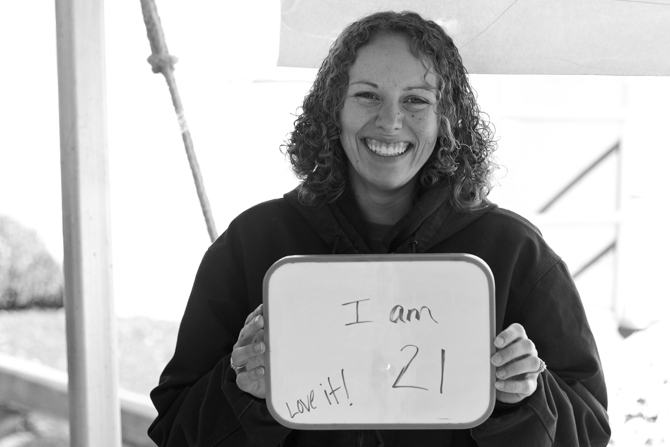 Perhaps the most memorable subject was a gentleman my family and I met in McDonald’s at our local Walmart. We chatted for over an hour, enthralled by his personality and stories. He regaled us with tales of his youth and being part of the winning U.S. hockey team that took gold in the 1960 Winter Olympics in Squaw Valley when he was sixteen; he talked about his degrees in English and literature and told, in great detail, of his varied coaching career afterwards. When we met, he was passing through on his way to Florida to play in a charity golf tournament with some friends, his large RV parked in the lot outside. While his appearance reminded me of someone with enough money to not give a crap, the man was truly fascinating.

As we left the store, there were no RVs parked outside. Extensive searching for the name he gave me yields no results. There is no record of him being on the winning U.S. hockey team or having a career in coaching. There’s no evidence that a word he told us was true, but, in his mind, that world was alive and a part of him. What he wrote on my little whiteboard is perhaps one of the most encouraging scripts I’ve read in a long time: 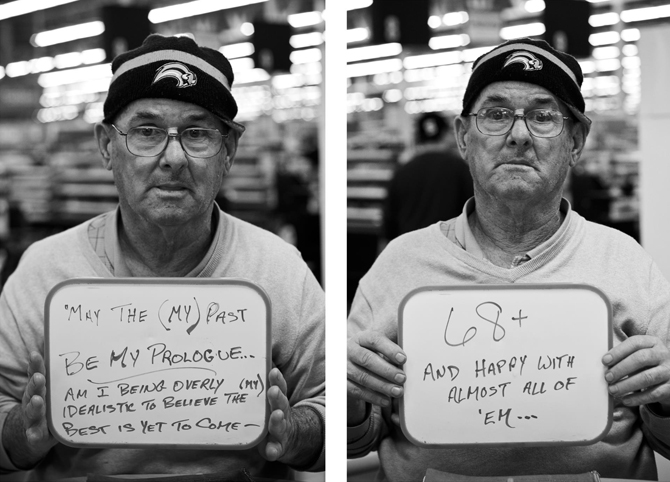 Wow! Regardless of the truth of his life’s story, I can only hope and pray that I have a testimony like that when I’ve reached the end of my life.

« The Wing Is A Clever No-Rails Slider
Shooting Infrared Using A Fuji X-Pro1 With A Rokinon 8mm F2.8 Fisheye Lens »