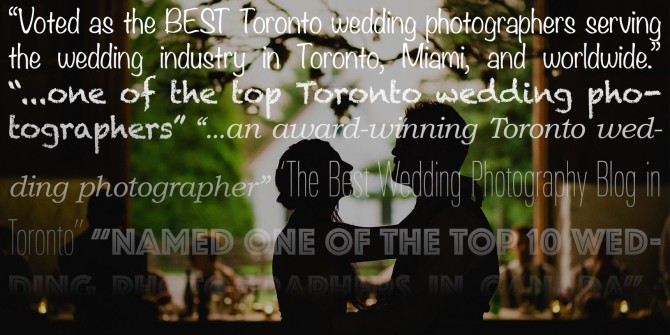 Have you ever found yourself in the following situation? You are researching wedding photographers, either as a prospective client or as a photographer scoping out the competition, and encounter the following:

On a superficial level, these designations are quite impressive. But when the fascination has subsided and the analytical part of your mind awakens and you have a good think about it, you wonder: who ranks them, and based on what, exactly? I did this and decided that most attempts to rank the top wedding photographers are an utterly meaningless endeavour.

Although my fascination with this subject has existed for several years – researching the Toronto wedding photography market when starting my business – the direct inspiration for this article was two related experiences. The first was an unauthored Toronto Life article (advertorial seems more apt) titled, “Wedding Guide: the best wedding photographers in Toronto”. It listed seven wedding photography companies and included contact details and brief descriptions of their approach. Most notably absent was information about how they compiled the list. I pointed this out in the comments beneath the article, writing, “Is it an honest opinion about the best photographers in town based on experience and polling, or were these spots paid for?” (Unsurprisingly, no one from Toronto Life believed my question was worthy of answering.) This was two years ago, and I was recently reminded about the article’s existence by several photography inquiries I received as a result. I impressed some readers with my forthrightness and because, unlike most of the other commenters, I chose not to engage in link-spamming the discussion.

The problem with creating lists of the top wedding photographers

The difficulty with any list of the top wedding photographers is that they are either a) arbitrary, b) favourites by another name, or c) based solely on portfolio images. In the Toronto Life example, the wedding photography companies appear arbitrarily chosen. They presented the list without any explanation or introduction. This lack of transparency in the criteria used for judging takes away from the objectivity and authority of the results. Superficially, inclusion in the article seems bought, and that is a major problem because the article could be honest and could be right. Unfortunately, its exclusion of any quantifiable supporting material, such as client satisfaction, contest wins, or social media presence, leads me to suspect its legitimacy: it fails to answer the crucial question of why?

Nicholas Purcell’s article, while being less obviously dubious, is not free from subjective bias, being a curated list of favourite wedding photographers as decided by him based on calibre their portfolios. It is not my intention to question his choice of favourites, because doing so is impossible, since it is a matter of aesthetics (as futile as arguing favourite colours). At issue is the assertion, made via the title and introduction, that these are the best wedding photographers in the world, period. Additionally, inclusion on the list was based entirely on the wedding photographers’ portfolios, which is not an accurate measure of quality. Ranking the ultimate skill of a wedding photographer based upon their portfolio, as opposed to their entire body of work, is like ranking television shows by their strongest episode or musicians by their best songs, all the while assuming, rather naïvely, that it is a fair representation of the best. Bad shows can have exceptional episodes and one-hit-wonders can top the charts and then fade into uninspiring careers. A true sign of the mastery of wedding photography is consistently good performance beyond the hits. For top wedding photographers, this would mean digging deeper, beyond the portfolio, and into the deliverables. Surely, no photographer is delivering portfolio quality work with every image they send to their clients, but each has a bar representative of their average performance. Should this not be the defining feat? A system that ranks the best by their hits creates an inherent bias against those whose overall work is superior but whose hits are not as exceptional. The reality is, a photographer’s top images can result from chance (especially for wedding photojournalists), whereas good and consistent performance throughout all of their work is a more desirable trait, and in my opinion, a greater measure of overall skill.

Most wedding photographers do not show their full body of work, and I am no except. Privacy is the main reason; in retail photography, most of what you shoot is not meant for public consumption. Wedding photographers are hired to record emotional, private events, and do not wish to violate their clients’ trust through excessive sharing. This leaves us portfolios that are not representative of photographers’ overall consistency of product. Even worse are lists presented with authority but without explanation; they are absolutely meaningless and not worthy of our consideration. We can overcome this impasse by relying on objective and quantifiable measures of quality.

The following are a set of suggestions for objectively ranking top wedding photographers using measures that are relevant to both the business and the art, but not as susceptible to the subjective bias art is known for.

Note: When results are based entirely on subjective appeal, and where such judging is unavoidable, it is important to establish who should participate in judging. Judges could be other wedding photographers, wedding industry peers (planners, makeup artists, videographers, etc.), or clients (past, present, and prospective). Wedding photography’s raison d’etre is client demand and delight, because that is what drives sales and profits, so it is appropriate to ensure that their preferences are included. A simple “expert” and “clients’ choice” poll would suffice.

When subjective rankings of top wedding photographers are unavoidable, explain your results

Ultimately, some of the above suggestions are based on subjective preferences, submission of portfolio images versus full weddings, or both. To foster honesty in ranking the top wedding photographers in the world, we have to be transparent about how the results are derived. For example, creating a list based on the highest rated wedding photographers on Yelp with over 50 reviews allows readers to determine whether the list has utility for their individual needs. Creating the same list but leaving out the method of its results will create suspicion and distrust. Let us be open about how we assemble these lists – whether or not they feature me. ;-)

Pavel Kounine is a documentary wedding photographer in Toronto, and a photographer of other things, too. You can visit his website for more of his work, or follow him on Facebook or Twitter. This article was originally published here and shared with permission.

Wedding Photography Sales: Top 5 Client Issues and How to Get Past Them by Sal Cincotta