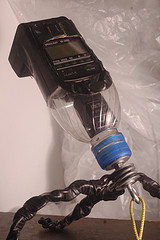 What do you get when you cross a Nine Cents Tripod with a Pocket Foldable Tripod? A DIY Gorilla Pod.

Reader Alan Muller came up with a great way to combine the two tripods into a new even-better-then-each-of-the-originals tripod, which is very similar to the well known Gorilla Pod.

On his example Alan uses a bottle flash holder, but this Gorilla pod will firmly hold a medium sized point and shoot.

Alan used number 10 wired to make the legs: twisted and then folded and twisted again. This gives the Tripod a firm set of legs.

The wired can then be wrapped with shrink-wrap (fancy) or electrical tape (Ghetto).

At the base of the bottle, Alan used an eye bolt instead of a cap nut (or machine screw) to allow the attachment of a safety line or bungee etc.

Another bolt of ingenuity (pan intended :) was to use washers to separate the tripod’s legs. Those give it stability and make some order in that messy area.

DIY – The Spiderpod: a modification of Hunter Frerich’s wire tripod

DIY – Make a Free Light Stand Out of an Old Tripod