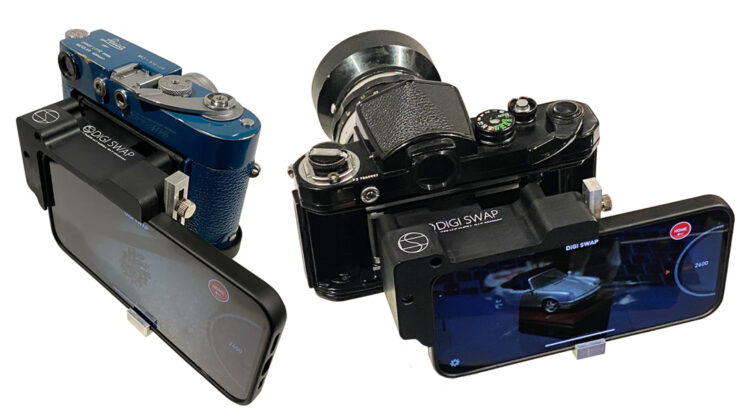 Well, we never really did see “digital film” come to fruition, but this might be the next best thing to let you use your film cameras digitally – sort of. It’s called the Digi Swap and it’s an attachment that allows you to connect your iPhone to the back of your camera and see through its lens. They’ve posted a couple of videos to show how it works and the kind of results you can expect.

But essentially you remove the back from your camera, connect the Digi Swap, which features a built-in focusing screen for the lens to project on and a macro lens allowing your iPhone’s camera to focus on it, and then fire up the app. What makes it special, though, is that the only setting on the app is the ISO. It monitors your actual camera’s shutter for shutter speed and the aperture is defined by your lens, so you just shoot your camera as you normally would.

It’s a very cool looking device and allows you to get that full-frame look with your iPhone, although I haven’t seen a specific list of compatible cameras yet. As well as stills, you’re also able to shoot video using the app, too. Just put your shutter speed into bulb mode, jam the shutter down and the app starts recording video. When you let the shutter go, it automatically stops recording.

It does seem like a bit of an unwieldy setup but from the video above, it does look like something you could easily get used to. The adapter and smartphone don’t look like they hinder the grip on the actual camera that much at all. It might be a bit difficult to see through the viewfinder, though, unless you were able to add a right-angle finder to the camera.

It’s a somewhat unique look that gives a very vintage feel, although you’ll want to make sure that focusing screen on the adapter is absolutely spotless before you connect it to the camera and attach your phone. It looks like it’s picked up a few dust spots in that second video, showing how the app records video clips.

The Digi Swap is going to be coming to Kickstarter in April, and the planned selling price is $199 for the device and another $49 for the app. That might seem like a lot for an app, “Why not just make it $249 and include the app for free?” but if you wanted several adapters that you could leave permanently on multiple cameras, that $49 lower price on the adapter itself makes a lot of sense.

At the moment, it appears that it’s iPhone only  (X, XS, 11, 11 Pro, 12, 12 Pro, 13, 13 Pro), which kind of makes sense because all of their cameras are in standard places. With Android devices, it’s a little more tricky because every company’s different, there are a bunch of different camera module setups out there with all kinds of different positioning and there are still some Android phones with a rear hindered by a fingerprint sensor – which would make unlocking the device a pain when it’s mounted to your camera.

So, developing a hardware device like this that would work across all Android devices (or even just the dozen most popular) is tricky. As is coding the app itself to meet the requirements and limitations of different Android API implementations. It would be nice to see it come to a few of the more popular models of Android device in the future, though.

The Digi Swap is expected to see its first outing next month at CP+ 2022 in Japan, where the company behind Digi Swap is based. In April, it will come to Kickstarter and the device itself is expected to sell for $199. The app will be a further $49 and an adapter allowing it to be used with Leica M cameras is also expected to be available for an extra $88.

Whether or not those are going to be the Kickstarter prices and it’ll increase when it goes retail or if those are the retail prices and the Kickstarter prices will be lower is currently unknown. A Hasselblad medium format system is also reported to be in development but again, there’s no word on whether or not that will be ready in time for the campaign.

For now, you can find out more on the Digi Swap website.