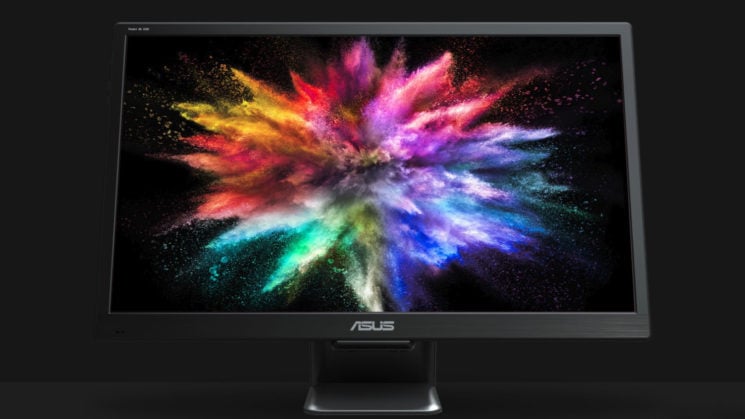 ASUS hasn’t traditionally been the first name photographers and video editors turn towards when it comes to monitors. While their motherboards, graphics cards and other components have been extremely popular for years, their monitors haven’t always been held in the same regard.

They have definitely improved over the last few years, though, and ASUS has now really stepped up to the plate with their latest ProArt announcements. Two of them were being showcased at NAB 2019; the PQ22UC 21.6″, a USB powered 4K OLED 10-Bit HDR display, and the PA32UCX, a 32″ desktop monitor also offering excellent specs for imaging & video editing. We spoke with ASUS about the new monitors while we were there to find out more.

The ASUS ProArt PA32UCX is a significant next level step up from the existing, and quite popular ASUS ProArt PA32UC. Stepping up from the UC to the UCX you get three different formats of HDR including HDR-10, HLG and it will be the first production monitor to support Dolby Vision. The number of dimming “zones” has also seen a bump from 384 to over 1,000, to help increase the evenness of light across the display.

This is a very cool monitor. It’s a 21.6″ OLED 4K display which offers 100% sRGB, 100% Adobe RGB and 99% DCI-P3 colour. It also supports three different HDR formats, including HDR-10, HLG and Doby Vision, but it’s portable. It powers directly from Type-C USB Thunderbolt and supports video over USB, HDMI or DisplayPort. This thing is about as sexy as it gets when it comes to portable displays. It could be the perfect companion to the recently announced ASUS StudioBook S.

The ProArt PQ22UC is also expected to be released in July with a price of $3,999.

Both monitors look very sexy in person. The black levels are some of the darkest I’ve seen, the colours are very nicely saturated without clipping, and overall the images coming up on both screens just looked stunning. Being matte screens (not glossy!) they offer excellent visibility in a range of environments. Of course, with monitors at this price point, one would expect no less.

The monitors do come pre-calibrated from the factory, but for best results, you’ll still want to use something like an X-Rite i1 Display Pro to profile them regularly when hooked up to your computer, especially if you need to match multiple screens to each other.