I have a love/hate relationship with backpacks. About 16 years ago I picked up a Tamrac Cyberpack 6 and I didn’t find anything that came anywhere near close with regard to comfort and capacity until a few months ago when I got the Lowepro ProTactic BP 450 AW II. Most backpacks are just designed badly. Sure, they hold a lot of gear, but they’re often a killer on the back when fully loaded.

Thomas and the team at Alotech, though, have been working with wildlife photographers to work on a bag that allows you to carry a ton of heavy gear comfortably while avoiding the pitfalls of many other backpack designs on the market. Their new backpack is called the ELEV 5800′ and it’s funding through Kickstarter. 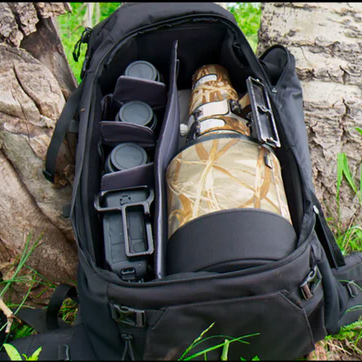 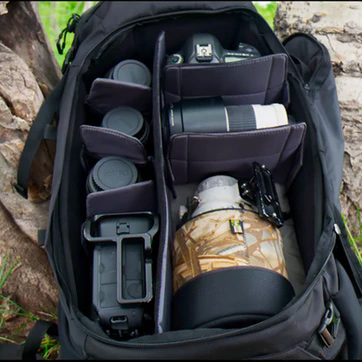 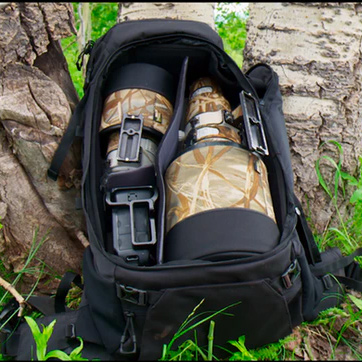 As you can see from the images above, the interior of Alotech’s ELEV 5800′ backpack holds quite a bit of kit. But despite the amount it can carry, They say that it eliminates all the shoulder and back pain associated with  most other camera backpacks, not to mention the back sweat. In fact, Thomas is so confident in his product, that he’s even put his personal phone number on the Kickstarter page for people to call or text and ask questions.

As well as the main internal storage, there’s a second expandable storage compartment on the top for more cameras and lenses (they say it fits a 1DX II and 300mm f/2.8), drones, or other gear. For most of the places I shoot, I think a towel and spare change of clothes would be the best items to pop in there.

Unlike most photography backpacks (but not uncommon to hiking backpacks) the back panel of the ELEV 5800′ is contoured to match your back’s natural curve, with deep air channels to help increase airflow and keep your back cool. 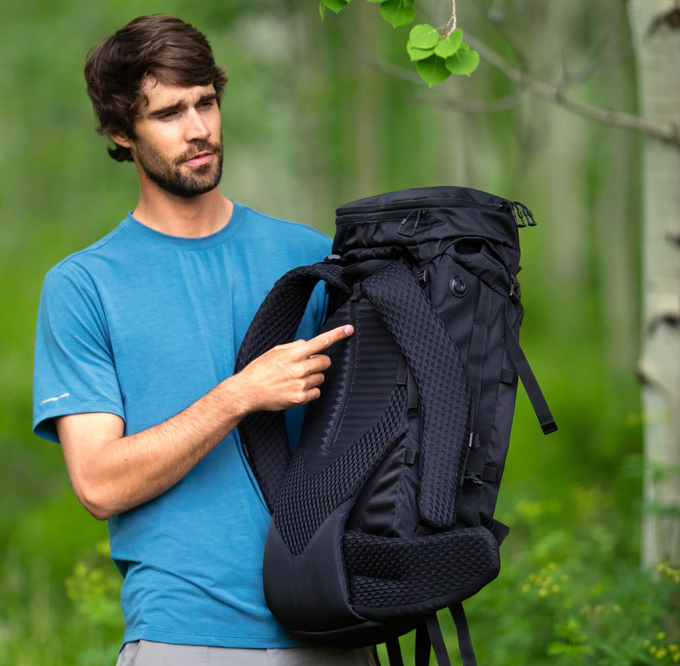 And because everybody isn’t the same height, there are three sizes for people of different stature covering people from 5’1″ up to 6’7″. They’ve taken gender into account, too, with optional straps available for ladies. For those who feel they might be in-between sizes, the straps for all sizes of the bag are micro-adjustable, too.

As well as gear storage, there’s also water bottle storage to keep your fluids within easy reach, and there are a number of storage accessory packs for things like memory cards, batteries, lens caps, and other things we often lose out on location.

And speaking of location, to get to many of the locations that many of us often want to shoot, we may need to fly. The ELEV 5800′ is also carry-on compatible, although to be sure, you’ll want to check with the airline before you go. While most airlines are pretty standard, some can be price-gougingly restrictive.

The construction of the bag looks pretty solid and Alotech says they use a durable waterproof fabric for the exterior of the bag that’s easy to clean. They also say that some of the interior surfaces use the same material to prevent dirt and dust build-up inside the bag which could scratch your lenses or other kit.

A comparison of specs on the campaign page does seem quite favourable towards the ELEV 5800′ compared to the similar competition. Of course, it would. It’s their campaign. It conveniently doesn’t mention bags like the aforementioned Lowepro ProTactic BP 450 AWII (which is also carry-on compatible), but it’s still a nice quick comparison regardless.

That aside, though, it looks like a very well thought out bag. As a location shooter who regularly has back problems with camera backpacks (I’ve got about 20 camera bags now, but only use three), I am intrigued to see how it feels myself when fully loaded with gear. Hopefully, there’ll be one at The Photography Show next year I can check out.

If you want to try the Alotech ELEV 5800′ and don’t want to wait until it starts appearing at photography shows, you can back the campaign now starting at $399. The campaign ends on August 27th, and bags are expected to ship in February 2020.

What backpacks do you use that don’t kill your back?